Watch Dogs: Legion and the Death of the NPC

You’ve all played open-world games, right? They’re usually stuffed with Non-Player Characters (NPCs); mindless drones for you to screw with and murder when you get bored.

Ubisoft’s E3 2019 conference began with a demo of the third Watch Dogs game. After the first game’s incredibly misleading 2012 demo, I couldn’t have cared less. Until they unveiled their newest innovation, a mechanic that could revolutionise open-world gaming.

In Watch Dogs: Legion, hacker group DedSec is recruiting a resistance. It’s your job to convert people to the cause and use their unique skills to take down an oppressive totalitarian regime.

Instead of playing as one main character, you manage a cell of up to 20 NPCs. Each NPC has their own randomised traits (‘Addicted to adrenaline, +100% damage, May die randomly’ states one guy’s profile in the demo) and a class you assign them based on combat, stealth or hacking.  .

“This revolutionises the way we think about our characters.”

Once they have a class you can upgrade your characters’ skills, from temporary invisibility to controlling face-hugging spider drones, but be careful – if your character dies, they’re gone for good, and all those upgrades go with them.

Premadeath in a Watch Dogs game.

When incapacitated by enemies you can either surrender or resist. Resist but fail to escape and you’ll never see that character again. But surrendering gives you a chance to get your character back by recruiting someone else who can break them out of prison.

This revolutionises the way we think about our characters – we choose them, we build them up, and we lose them. Emotional investment comes from stories players create themselves, not narratives the game forces on us.

“Killing has real consequences in the world”

And this is coming from Ubisoft, kings of the formulaic open world – from Assassin’s Creed to Far Cry, their games always prioritise pointless busywork and tower-climbing over genuine investment.

You recruit people by doing missions to fill their Dedsec support bar. Do enough good deeds for them and they’ll join up, even enemies that in any other game would just be there as canon-fodder.

To that end, Ubisoft have confirmed there are loads of ways to play non-lethally. The devs talk about how killing has real consequences in the world because every NPC has loved ones living in it, family or friends. You kill someone’s brother and they’ll blame DedSec.

But, you can always win them back. You just have to work harder. Do they have a relative waiting for life-saving surgery? Bump them to the top of the queue. Crippling gambling debts? Wipe them clean.

“Everyone is a secret weapon” proclaims the trailer, and they mean everyone. The demo features a 70-year-old grandma named Helen (after Helen Mirren’s retired assassin from Red 2?) tasering security guards and parkouring over cover like a geriatric ninja. 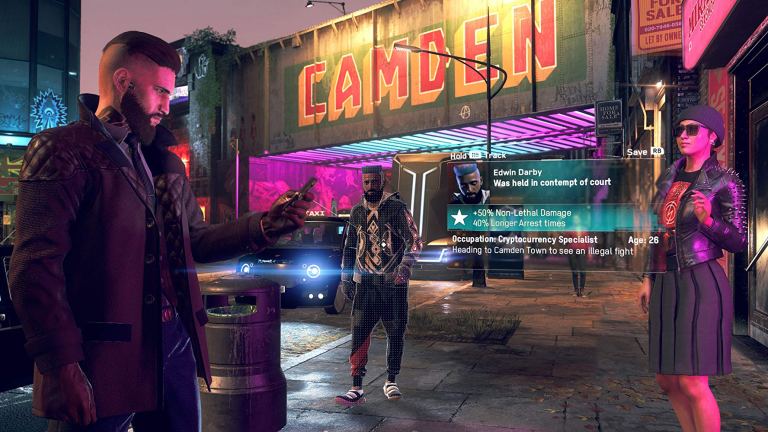 There is the question of how Play as Anyone impacts Watch Dogs: Legion’s story. The game has 60 missions split into 5 separate threads, each tackling a different enemy – from the totalitarian government to Guy Ritchie-style gangsters.

But how will playing as different characters affect it? In a recent interview the devs said they’ve written “20 different versions of the script”, and they’re using modulation to pull more characters from an already impressive number of voice actors. That’s a lot of replay value.

“It’s not the characters who have personality this time, it’s the world”

Will Legion’s story be as engaging as the character-driven narratives of The Last of Us or a Grand Theft Auto? Almost certainly not. No matter how many versions of the script there are, surely they devs are still sacrificing some of the personality fans loved so much in 2016’s Watch Dogs 2.

But that isn’t what Legion is aiming for. It’s not the characters who have personality this time, it’s the world itself, from the gorgeous design of near-future London to the hokey cockney accents.

After the original Watch Dogs’ po-faced grit fell flat on its face the series is prioritising fun over seriousness, and I for one can’t wait to play around in this world.

Featured Image and article images courtesy of  Ubisoft Toronto Production Studio via IMDb. No changes have been made to these images. Company credits available here

Let’s Go To the Beach!