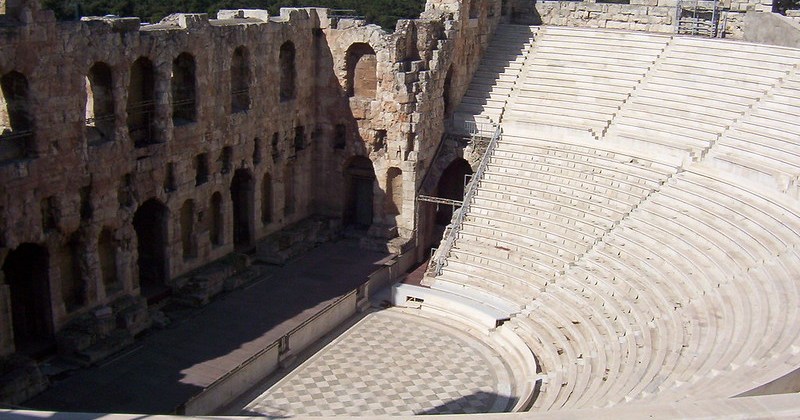 Ahead of the Amplify festival at Nottingham Playhouse, Nina chatted to playwright Hannah Greenstreet on her queer adaptation of Andromeda with director Charlotte Vickers.

Nina: What was your first impression of the original play?

Hannah Greenstreet: My first impression of Andromeda by Euripides was that there wasn’t a lot to go on! The original play only survives in fragments.

Essentially, we have quite a lot of the first scene – Andromeda is tied to a rock, about to be sacrificed to a sea monster because her parents have offended the gods, before Perseus flies in and rescues her.

“the Andromeda myth is centred around a romantic relationship between two people from different cultures.”

Then we have a few lines from the rest of the play. From other sources, we know that Andromeda and Perseus married, and that Andromeda’s father Cepheus wasn’t very happy about it because, as a Greek, Perseus was from outside their culture.

N: What inspired your take on the play- specifically the LGBT+ elements?

H: There have been lots of adaptations of Greek drama and recently there’s a lot of academic research going on into fragmentary plays. However, (as far as I know!) Andromeda hasn’t been adapted many times before.

The director Charlotte Vickers came to me with the idea of a queer adaptation and introduced me to the play – I’d never even heard of it before that. Over a lot of discussions and drafts, we decided that the best way to do this was to parallel the Andromeda story with the story of a modern relationship between two young women at university: Andi and Percy.

Like Andromeda, Andi is also stuck; over the course of the play, she realises that she is bisexual but does not think that she can come out to her parents. Percy is a Greek myth nerd and one of the things Percy and Andi do together is act out bits from the Andromeda myth.

N: Given your adaptations, is this play targeted at any specific audience?

H: As Andi and Percy are university students, the play is targeted at young people aged about 16-25. I didn’t come out as lesbian until I was 22, and spent a few years before that being quite confused. I remember telling Charlotte in rehearsal, ‘I’m writing the play I wish I’d seen as a teenager!’.

I think it’s so important to offer positive depictions of LGBT+ relationships onstage, but representations that don’t shy away from the difficulties and messiness of the situations people find themselves in. We’re working with Pegasus Theatre in Oxford to run workshops exploring the themes of the play with young people, which is really fun.

“It’s been a really collaborative project, which has been really exciting.”

N: Andromeda was initially created in an entirely different time and culture from the modern world. Are there any elements that you find to still be relevant to our time?

H: The central story of a hero rescuing a princess from a sea monster does seem a bit far-fetched now. But within that, the Andromeda myth is centred around a romantic relationship between two people from different cultures (Andromeda and her family are Ethiopian, Perseus is Greek) and relationships between parents and children.

The modern relationship between Andi, who is British-Pakistani, and Percy, who is Greek-British, has allowed us to grapple with more problematic ideas of race and gender connected to heroism in the Greek myth; in our version, Andi challenges Percy on her saviour complex. The process of adaptation has also allowed us to explore how different ways of telling a story affect the story that gets told.

N: What first motivated you to take on this project?

H: As I said, Charlotte came to me with the idea and we found that we were good collaborators. It was the first adaptation I’d written, so I naively assumed it would be easier than writing an original play, which I had quite a bit of experience in – how wrong I was!

“I’d be really happy if watching the play reassured someone having a difficult time with their identity.”

Charlotte and I first started talking about adapting Andromeda in 2017 and the play has gone through multiple drafts since then. We’ve also had two research and development weeks with our amazing actors Rosie Gray, who plays Percy, and Ashling O’Shea, who plays Andi, dramaturge Frey Kwa Hawking, and classical consultant Martina Astrid Rodda, who translated the fragments for us. It’s been a really collaborative project, which has been really exciting.

N: What do you want the audience to take away from the play?

H: I’d be really happy if watching the play reassured someone having a difficult time with their identity – that they feel seen and they know that they can figure things out, even though it is hard. I also hope it might inspire people to explore the Classics for themselves – there are some really great stories to play around with.

N: Finally, why would you recommend someone to go and watch the play?

H: The actors Rosie and Ash are incredible. They really make the relationship between Andi and Percy come alive, and make the humour sing out too. Love, stars, myth. It’s pretty epic, really.

Andromeda is on at Nottingham Playhouse on Saturday 19th October at 5pm as part of Amplify Festival. More information and tickets here

Look out for… October