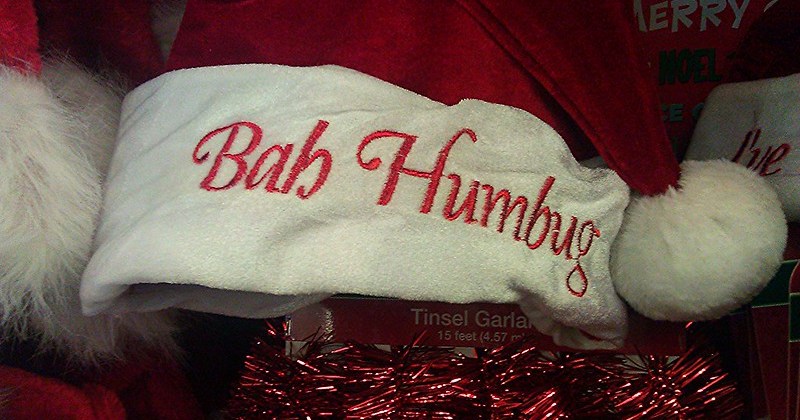 As you read this, it is important to remember two things. The first being that I am incredibly cynical, and the second is that I love Christmas. I realise these two things seem to be at odds with each other but honestly the unfettered, mythical joy and ideology that comes with the festive season warms my dark, coffee filled heart.

We can see further evidence of the happiness it brings to others all around us. People posting pictures of Will Ferrell dressed as an elf on social media; reminding us how many sleeps until Christmas or Michael Bublé’s dulcet tones filling the corridors of shopping centres everywhere. However, accompanying this tide of festive cheer is the grim, unavoidable voice and pinched face of the humbug.

“It’s only September”, is their rallying cry

“It’s only September”, is their rallying cry, as they proudly state they “don’t do Christmas” and look down on those who show even a hint of joy at the sight of Jolly old St Nick. What is the motivation of these people? Is it some form of gatekeeping on how one should be allowed to enjoy the festive season or a deep-seated loathing due to festive trauma involving boiled sprouts and a particularly offensive cracker?

Christmas is, at its heart, a time of kindness and giving, so surely the music and decorations are just joyful signposts to remind us that something wonderful is coming? Apparently not for the humbug, who looks upon the festive Facebook countdowns and advent calendars with the same face one normally pulls when finding out the cat has used your pillow as a litterbox again. They are just crackers Nigel; they aren’t going to burn down your house. The problem is when the humbug looks down on people buying Christmas supplies in September, they are both sneering at and ignoring a larger problem.

Let us set aside humour for the moment, unwrap some facts about Christmas and look at why we can purchase our crackers before they have packed away the sunscreen. The festive season now comes with more traditions and expectations than ever before and all of it is available to buy on the local high street or even one click away. Yet, the cost of Christmas rises. The Bank of England says households are expected to spend £500 extra on top of their normal outgoings to accommodate the increase in prices on everything- from food to gifts, whilst combating the fact that items such as your enjoyable chocolate orange has shrunk in size but not in price.

This is before factors such as heating, increased electrical use and water use for the family you may have staying. At this point I wish to raise another oft’ heard moan of the humbug crowd, “Christmas is only for the kids really”. Whilst I believe they are wrong, many people do see it as a time for joy and wonder for children, so why is child poverty at this time of year at a frankly shameful all time high? According to the DWP statistics there were 4.1 million children living in poverty last year and that figure is only set to rise with the charity, Shelter, estimating over 130,000 children will wake up homeless on Christmas morning. Take a moment. Re-read that. 130,000 children homeless at Christmas.

Try and help at least one of those 130,000 children who ask how will Santa find them if they don’t have a home

So, if you find your bitterness at the Christmas cards being on sale early is because “Christmas is only for kids” then I urge you to complain somewhere else or maybe try and help at least one of those 130,000 children who ask how will Santa find them if they don’t have a home.

Having successfully derailed the humour train with stark and uncomfortable facts like an oversized tree on the tracks, I shall attempt at least to offer a warm cup of mulled hope. By being able to spread the cost of buying gifts, decorations and the other trimmings that make up Christmas, many families find the stress of the festive season significantly lessened.

The charity, Mind,  has released a list of top ten tips to better mental health at Christmas, many people are setting sensible budgets for presents and if you want to help people during the festive season there are loads of options out there. For example, volunteering at homeless shelters or forgoing a winter spiced hot chocolate and giving a few pounds to charity.

Well yes, it is excessive, it’s Christmas and if there is a time of year for excess, Christmas is it

Now I know this may not get through to all the scrooges and grinches that haunt the shops heaping their sneer over everything, “Who needs a foot long Toblerone?” and “It is just excessive.” Well yes, it is excessive, it’s Christmas and if there is a time of year for excess, Christmas is it. Now pass me my foot long Toblerone and throw in a party box of gingerbread because for once this year I am having people round and to be able to share this with them is a joy all of its own. If I haven’t won you over by now…don’t be a ‘c’ word about it.

Featured image courtesy of Mike Licht via Flikr. Image License found here. No changes were made to this image.

The Ethics of Extinction Rebellion