The Ethics of Extinction Rebellion 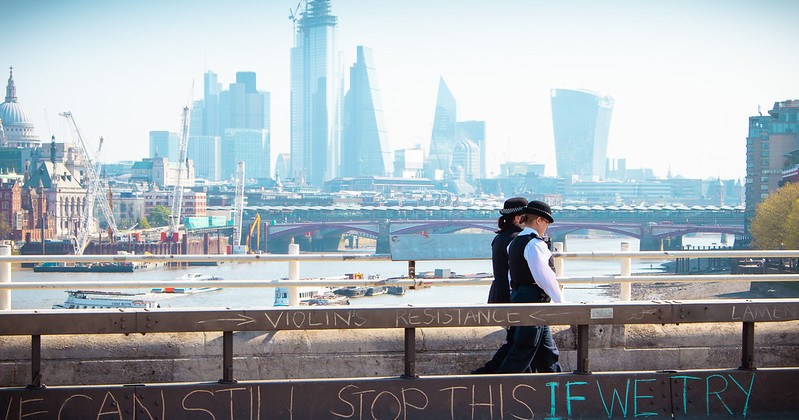 Extinction Rebellion are prominently and currently known for disrupting ‘business as usual’ with non-violent, disruptive civil disobedience, which has been enacted in previous weeks in their International Rebellion to raise awareness of the current ‘climate emergency’ and shake the current political system.

Within the strategy of Extinction Rebellion, as stated on their website, they promote mass “above the ground” civil disobedience which is in full public view and take responsibility for these actions and the risks involved, over traditional systems. Political change is advocated over personal change, despite the latter being welcomed, with the ask of people worldwide finding their courage and collectively acting to bring about change. The overall principle and strategy of the current International Rebellion is to open the world’s eyes and create a state of un-management for current political systems.

“they promote mass ‘above the ground’ civil disobedience”

The Declaration of Rebellion states with “the virtues of truth and the weight of the scientific evidence” of the current climate emergency, it is our duty to act on the behalf of the future of the planet. The rebellion is declared against our government and the institutions that threaten our future, named corrupted and inept, with conscience and reasoning, because of the failure “to provide any assurance of adequate protection” and favouring “short-term gain and private profits” over the common interest and therefore the social contract bonds are “rendered invalid”.

However, a raised question is what good and success can non-violent civil disobedience, with hippie like actions, do to impact our governing institutions to make change to alter society, potentially at the grass roots level? Because of a partial worldwide consensus of the calamity that climate change is, there is a sincere and serious possibility that the rebellion is alienating the institutions they will need and want to negotiate with. They, however, argue their aim is “to make these most critical and urgent issues of our time finally unignorable to decision makers” and, therefore, for less disruption, “they (the decision makers) must act”.

During the International Rebellion police resources have been ‘distracted’, through mass arrests and large amounts of police reinforcements being called in, creating problems with the lack of government action in areas such as fighting knife crime. They argue that “30 years of government inaction have left us with no choice” and a lack of government action on issues, particularly fighting knife crime and on the climate crisis, “are two sides of the same problem”, but similarly they could be alienating more of the public, when they want to appeal to everyone as the climate emergency is everyone’s problem.

“During the International Rebellion police resources have been ‘distracted'”

An ethical difficulty for Extinction Rebellion is about their ‘regenerative culture’ with the welfare of less experienced rebels. People are asked to look after themselves when being involved, through their affinity groups a well-being person is assigned and support teams are aimed to be in place, before, during and after actions. But there is limited capacity and they work hard to make people aware of the risks they are taking, which is possibly not enough for their mass rebellion campaigns.

Extinction Rebellion found themselves on peace, truth and love, named the ‘finest weapons’. There is spirit and unity in the rebellion and is opening the world’s eyes up to regenerative community for life, but just maybe their ethics around alienation could be improved and the importance of welfare could be enhanced for their social movement to gain more social impact.

Featured image courtesy of Alexander Savin via Flickr. No changes were made to this image. Image use license here.