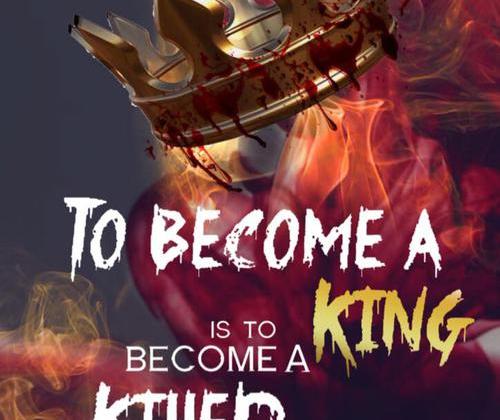 ‘Loosely based on a well-known Shakespearean play, this immersive theatre experience allows the audience to not only observe the play, but to become a part of the mystery; from witnessing the interview of a scared palace cleaner, to overhearing a sketchy midnight phone call, we begin to dive deep into a tragedy with more questions than there are answers.’ (quoted from the official NNT website).

“Excitement, confusion and charisma are at the heart of this play”

‘Within five years of Scotland voting yes to independence, the King is murdered, and the country is thrown into panic. Those watching the events unfold from both inside and outside begin to question: Can the young monarchy survive such a brutal murder? And who would hate the King enough to commit such a heartless act?’

Excitement, confusion and charisma are at the heart of this play. One enters a room filled with excitable characters, ready to launch into action. The first real shock is the nature in which the play is conducted. Unlike your typical play – where the audience are simply onlookers to an unfolding drama – it really centres around the audience’s involvement.

At first glance, this play may seem somewhat chaotic, characters shouting and screaming from every corner of the theatre but on closer inspection, one feels truly immersed into what becomes a detective experience, compelling the audience into the centre of the drama as it unfolds before their eyes.

“Its simplicity is perhaps its most endearing feature”

The bulk of the play consists of five separate scenes, occurring simultaneously, dotted across the theatre. One scene is a very simple set, yet its simplicity is perhaps its most endearing feature. It shows a lady who is on the phone to someone, who we can suppose is her lover. Very little conclusion can be drawn from this particular scene, but its presence donates an ominous sense to the play.

Another scene shows three school girls, huddled around a laptop. The actor’s portrayal of these girls gave the play an element of urgency, with their flustered and worrisome demeanour. The backdrop to their set alludes to the Shakespeare play, Macbeth, with reference to Duncan as the King of Scotland. The parallel that one draws to Macbeth is one that has to be sought out; the gloom and fear that the actors inject into the play replicates that very element that is found in Macbeth, the audience continually an ever-fearful onlooker to shady events.

“It is a very aggressive interrogation, fraught with sensitive topics that are very much an issue in today’s world”

One of the scenes is set between the two rooms, and provides a foreshadowing to the scenes in the other rooms. It is a scene in which the palace cleaner is being interrogated by, what one assumes to be, the detective. It is a very aggressive interrogation, fraught with sensitive topics that are very much an issue in today’s world.

At one point, the detective acts with such great xenophobia that it renders the audience in a position of such discomfort that one almost considers simply walking out, but something about this scene keeps you from doing so. Perhaps it’s the concern you have for the suspect, as if watching the scene will stop it from erupting into violence, which is very much on the edge of the detective’s character.

The topics this play tackles in this scene very much point to some topical struggles and leaves the audience questioning their own innocence in the real world. The play almost suggests that if we were able to zoom in and examine, for ourselves, some of the cases and news stories of today, would we be as complicit in our lack of interrogation of them?

“The set for this play was one of the best yet; it really replicates what the actors are portraying”

The set for this play was one of the best yet; it really replicates what the actors are portraying. Its simplicity, yet subtle, detail really draws the audience in; likewise, the costumes’ simplicity allow the actors to receive the fullest of attention. Interestingly, the stark contrast between the set for the school girls and that for the King, suggests an element of class divide, which, again, brings in topical questions for the audience to ponder.

The play leaves the audience with many questions unanswered. Something wonderful about this play is the multiple interpretations that one can take from it and be left to contemplate.

To Become A King Is To Become A Killer will be performed at Nottingham New Theatre from Sunday 24th of November to Tuesday 26th, with the final performances tonight at 7.30pm and 9.30pm. Tickets available here.