Part two of a two-part interview with award-winning engineer and Nottingham alumni Sophie Harker. Sophie graduated from UoN with a mathematics degree, and now works at BAE Systems. In this article, Sophie talks about her some of the wider issues facing engineering, and a bit about herself.

Joe Paternoster: Does engineering have a diversity problem? If so, what is being done to solve it?

Sophie Harker: Sadly, yes. Engineering has a diversity problem. Only 12% of UK engineers are female (the lowest percentage in Europe) and only about 8% of UK engineers are BAME. Improving the diversity of the profession is important to make sure that a product’s engineers’ designs are suitable for everyone. On top of that, the UK has a shortage of engineers entering the profession every year and so we need to encourage everyone to consider STEM based careers. For example, if we don’t encourage young girls into engineering, we’re losing 50% of the potential workface in the UK! It sounds simple, but it’s difficult and there are a number of initiatives to try and improve this. These initiatives are working on attracting more people to the profession as well as making sure that their future workplaces are inclusive of everyone.

JP: Does engineering have an image problem? Why should a young person choose engineering as their career path?

SH: I don’t come from a science or engineering background and was 19-years-old when I found out what engineering was. Prior to that I genuinely thought an engineer was someone that fixed your washing machine or installed your satellite. I thought they were all men in oily overalls with spanners because that was the only exposure to the word ‘engineer’ that I’d ever had – it took meeting an astronaut to open my eyes to what engineering really was! I go into schools regularly and the image of an engineer I held when I was younger is still really strong within young people. It is slowly changing and we are starting to take the back the title, but it’s going to take a lot more work to really change public perception.

“In 100 years’ time people will be able to look back on the work I did and what I contributed to mankind, and that keeps me motivated and engaged every day.”

Engineering is such a fantastic career for so many reasons – it’s interesting, it’s flexible and varied, you can travel the world, offers career progression, it is well paid – but the most important reason in my opinion is that you get to leave a legacy.  In 100 years’ time people will be able to look back on the work I did and what I contributed to mankind, and that keeps me motivated and engaged every day.

JP: What’s the future for engineering? Are we going to be seeing space travel any time soon?

SH: Engineering has so many exciting fields and industries, all of which have significant developments on the horizon. The advancement of technology in the last few decades has been exponential, and the engineering that goes along with that will achieve some incredible feats. Aerospace will face a game changing amount of innovation in the near future. Electric aircraft and greener fuels are of keen interest in the industry, and flying cars are currently being developed. We’ll travel faster and faster in hypersonic aircraft and will start to look to space in a more reusable way with spaceplanes that will take off and land on a horizontal runway – you’ll be able to fly into orbit as simply as you currently fly to Spain!

JP: You visited the Kennedy Space Centre at 16, which inspired you to want to be an astronaut. Is that still your dream now? How will being at BAE Systems help you achieve that dream?

SH: Yes, it’s still my dream – I do genuinely want to be an astronaut! When I was at Kennedy Space Centre the sheer scale of the space industry really astounded me but I never really thought it would be something I’d be involved with until I watched a video at their IMAX cinema. This short film showed a female astronaut on Mars with the tagline ‘This could be you’ and I thought ‘yeah, that could be me!’, then it just clicked. It’s hard to explain, but I just felt like all the pieces of the puzzle of my future came together in that moment.

“This short film showed a female astronaut on Mars with the tagline ‘This could be you’ and I thought ‘yeah, that could be me!'”

Being at BAE Systems has helped me develop many skills as an engineer that would be essential to any astronaut. Learning how to tackle engineering problems, picking up complex concepts and developing solutions are all important in space as well as the softer skills like team work, communication and flexibility. The company have been really supportive of my dream, too, so I know I’ll be able to give it my best shot when the next selection comes around.

JP: You met Dr Helen Sharman – how did you meet her, and did she have any advice that you’ve carried forward with you to this day?

SH: I entered a competition called ‘Our Space’, where applicants had to enter anything to do with space (an essay or a video, for example). I went full nerd and entered a video about how the physics of video games could be enacted in the environment (or lack thereof!) in space. I won the Garriott Games prize and as part of that I was invited to the Houses of Parliament to meet three British born astronauts – Piers Sellars, Richard Garriott and Helen Sharman. Helen Sharman was the first British person in space as well as the first woman on the Russian MIR station, and thus is a huge inspiration. When I finally got the courage I asked her for advice in becoming an astronaut and she recommended I consider engineering. She was the first person to open my eyes to engineering and help me see it as an option for my future. I was able to meet her 6 years later while I was working on Skylon to tell her that I had followed her advice, which became quite a poignant moment for us both. 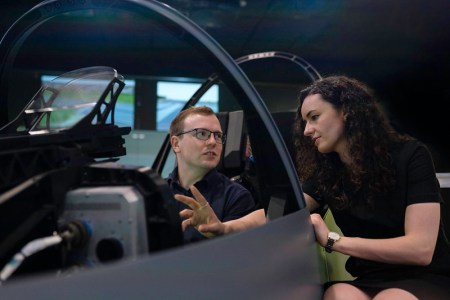 JP: You won the 2018 Young Woman Engineer of the Year Award. Again, huge congratulations, and do you have any advice for any aspiring female engineers out there looking to follow their dreams?

SH: Thank you again! Winning YWE still feels like a crazy dream to me – it’s completely transformed my life, to the point where I now get fan mail which is mad! If I was to give any advice to someone wanted to follow their dream into engineering it would be to never give up on it; learn from your failures (of which there will be many) and keep going. Pursuing dreams, be they into space or otherwise, has ups and downs, steps forward and back. When I first applied for YWE, I got through to the final shortlist of 10 engineers however failed to make it into the final group. I learned from the experience, came back the year after more prepared and ready to really show my passion for engineering and that was the year I won! If I’d given up, I wouldn’t have been named YWE and I wouldn’t have had the incredible opportunities that it has given me.

This is Engineering is a campaign by the Royal Academy of Engineering to raise awareness of what an engineer is and showcase the breadth of careers available in the profession. Visit www.thisisengineering.org.uk.

Featured image courtesy of This Is Engineering via Flickr. Permission granted by This is Engineering.

Body image courtesy of This Is Engineering via Flickr. Permission granted by This is Engineering.