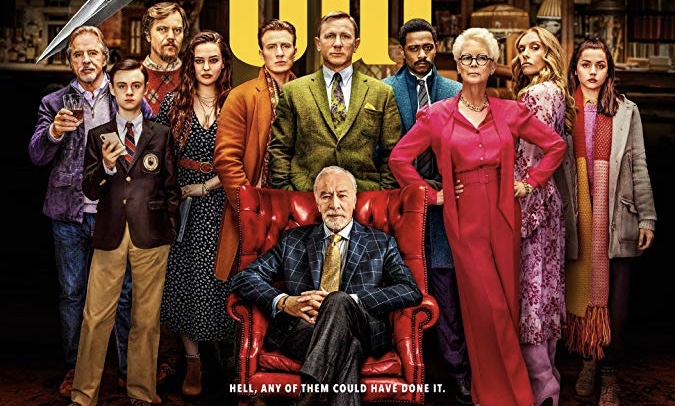 Working on Knives Out must have been something of a relief to writer-director Rian Johnson after his last film, Star Wars: The Last Jedi (2017). A few years on, the most notable thing about that film (which judged on its own merits is simply an okay popcorn-movie, like most Star Wars films) is the uproar its release caused for nebulous (often political) reasons. With Knives Out, Rian Johnson delivers a much smaller scale film (the budget is at least a few hundred-million dollars less than his last), an Agatha Christie-inspired murder mystery with an amusing script and a wonderful cast.

“This is often a funny film”

Whilst the film has been in the works for about a decade, there are still aspects of it that seem a response to his experience receiving backlash for his brush with larger franchise films. Most notably: the character of Jacob (Jaeden Martell from It), grandson of the deceased and an ‘alt-right troll’ who spends most of the film spouting hate on his smartphone. This is one of several tongue-in-cheek touches from Johnson that display the film’s sense of humour and, doubtlessly, this is often a funny film.

Most of the laughs come from the sharp script, and the wonderfully grotesque performances of some of the family members. Honourable mention should go to Toni Collette (snubbed by the Oscars for her performance in Hereditary) as vapid influencer daughter-in-law to Harlan, trying her best to cling onto her share of the family wealth. Johnson even occasionally stoops so far as to the gross-out gag courtesy of the nurse Marta (Ana de Armas) who is so unable to lie that the very act of doing so makes her vomit- very chunkily.

Johnson does right by de Armas who is given more to do as Marta than her largest roles to date as underdeveloped love interests (perhaps intentionally in Blade Runner 2049, but certainly with no irony in War Dogs) even if at times her role can seem more symbolic than anything else – the apparent ingénue in a nest of vipers. Daniel Craig seems to relish the opportunity to play against type as the renowned private detective from the American South, too eccentric to evoke any echoes of the James Bond role that he has for years been quite publicly bored with.

“The larger stars in the film are often impressive”

The larger stars in the film are often impressive as is the case for the aforementioned Toni Collette, Jamie Lee Curtis, Michael Shannon, and Christopher Plummer as the deceased. Chris Evans, free from the shackles of Marvel’s Captain America, gives a particularly entertaining performance as the boorish black sheep of the family: the epitome of idle rich privilege.

However, one can be forgiven for watching the film and thinking that Johnson has assembled too many talented actors to be able to give each of them their moment to shine. Many actors wonderful on the smaller screen are given very little to do. Lakeith Stanfield, a standout of the great Atlanta, is cast as a straight-man to Craig. Riki Lindhome (Garfunkel and Oates) is cast as the largely silent wife of Michael Shannon’s character. The exemplary Edi Patterson (lately so good in The Righteous Gemstones) is similarly side-lined in a mostly thankless housekeeper role.

“Finally, the script itself can also be disappointing despite basically being a strong piece of work”

Finally, the script itself can also be disappointing despite basically being a strong piece of work. It occasionally has some satirical touches as with the aforementioned alt-right grandson. There is a recurring joke about how Marta is considered ‘part of the family’ by people who constantly misidentify her country of origin, and another to do with the odious pride of ‘self-made’ millionaires.

“The film is enjoyable for what it is”

However, these jokes often come across as a relatively light teasing of the ultra-wealthy. The film is enjoyable for what it is: a funny murder-mystery with a few interesting twists and turns. But one can get the impression that Johnson intended it as being some great satire for our era (especially in the final act) and unfortunately it is rather too toothless to succeed at that.

How easy is it to eat vegan as a student?