Y’know, all that stuff that’ll make it an actual Fallout game. 16 months after its initial release.

Merchandise has been recalled, hackers have ruined the game’s economy and lawsuits have been threatened…

Wastelanders was meant to release last winter around 76’s anniversary but was delayed to make sure it “hits our [Bethesda’s] quality bar, and yours.”. In the meantime, the community were given a stereotypical Battle Royale mode no-one asked for.

Perhaps taking the extra time to iron out any kinks was for the best after a year of perpetual chaos. Since our last summary of the Fallout 76 disaster, merchandise has been recalled, hackers have ruined the game’s economy and lawsuits have been threatened by the Australian government. 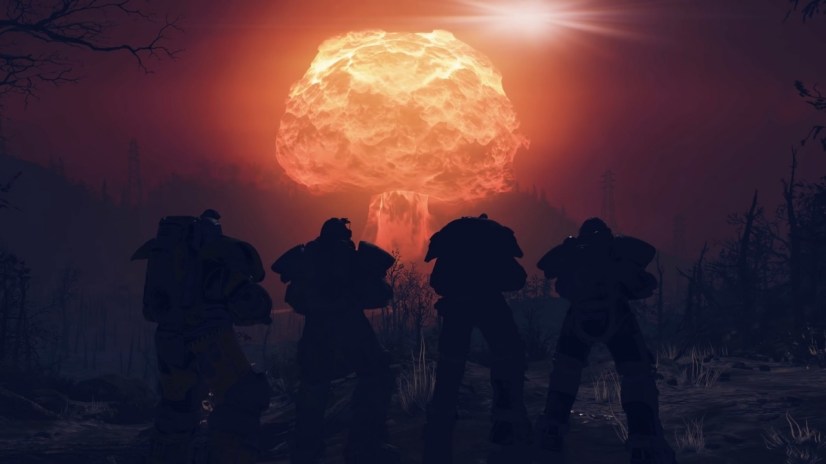 The collectable Fallout 1:1 Power Armour Nuka Cola Helmet, sold exclusively at GameStop for $149.99, had to be recalled last September after dangerous levels of mould were found on the helmets’ fabric inserts. Luckily only 32 of the 20,000 made were actually sold and said purchasers reimbursed. Although the helmets were produced by third-party Chronicle Collectables, not Bethesda themselves, the debacle was the latest in a trilogy of Fallout 76 merchandising scandals, following the controversies over the collector’s edition canvas bag and pre-order Nuka-Dark Rum.

Bethesda went back on their word. Whodathunkit.

After Pete Hines explicitly promised that 76’s microtransaction storefront the Atomic Shop would only ever sell cosmetic items that wouldn’t offer gameplay, advantages, Bethesda went back on their word. Whodathunkit.

First of all, there were the Repair Kits, that you could buy to (you guessed it) instantly repair your weapons, armour and equipment. Next there were Scrap Kits, one-time use items that let you scrap all the junk you’re currently carrying without needing to trek all the way to a workbench or your own stash.

As microtransactions go these are hardly the worst, but they arrive after explicit promises that they wouldn’t, and they’re part of an insidious type of ‘convenience’ microtransaction that exists to remove unnecessary barriers that developers put in front of players just to encourage spending. The removal of these barriers only makes the experience more enjoyable, so why aren’t they gone all the time?

This is the big one, lads. Bethesda became the laughing stock of the internet for about the sixtieth time in a year when, immediately after delaying the hotly-anticipated Wastelanders, they launched Fallout First, a $100 a year premium subscription service.

$100 a year. On top of a $60 base game still riddled with bugs and bereft of engaging content. Yeah.

Fallout First offers players fast-travel, private servers for you and 7 friends, and a scrapbox that allows unlimited storage for crafting components. All of these paywalled features had been requested since launch, and all of them expose Bethesda’s hypocrisy.

76 has no single-player experience only due to director Todd Howard’s insistence that everyone you meet must be another player. Private worlds thwart that core tenet of the game.The scrapbox’s storage is similar to the Repair and Scrap Kits, a solution to an artificial problem created by the developers, sold at a price. Fast travel is another of these ‘conveniences’, a mechanic included for free in most open-world games.

Then (of course) Fallout First launched broken. Private worlds were actually open to your entire friends list, whether you invited them or not, and showed evidence of other players’ looting and building. The scrapbox ate players’ components instead of storing them. Frankly, the shmucks paying Bethesda extra money deserved it, a sentiment enforced when the community head-hunted Fallout First members in-game.

Feeling towards 76 was so negative one player nabbed the falloutfirst.com domain before Bethesda and used it to mock them with a “F**K YOU 1ST” parody page.

Bethesda’s parent company Zenimax was forced by the Australian Competition and Consumer Commission to offer refunds to everyone who bought Fallout 76 from November 24th 2018 – June 9th 2019 after accepting “their actions were likely to have contravened the Australian Consumer Law”.

According to the ACCC Zenimax “misled” Australian customers about their rights to “repair, replacement or refund” despite 76’s flaws – listed as lag, server stability and more – amounting to a “major failure”.

Even over a year after launch, Fallout 76 still doesn’t have an anti-cheating system

Then there are the criminals. The felons who like to kick a dead horse. Fallout 76 has had multiple hacking scandals. Unknowncheats.me user ErectBAN released cheat scripts that let players spawn any item into the game, including impossibly overpowered legendary weapons and armour – and all this over 76’s December 14th free weekend event.

Then hacker group Dupers R Us found a way to spawn assets from 2015’s Fallout 4 into 76’s world – including the whole Brotherhood of Steel airship and “incredibly high” functioning NPCs that “wander around your camp while idle, and in combat they will relentlessly chase their opponent, taking cover and retreating when necessary.”. Players even got them to act as companions that protected them against enemies, and all this months before Wastelanders’ launch.

But the mother of all hacks was the one that let thieves steal players’ entire inventories just by going near them. This plagued the PC community for days until Bethesda finally patched it out, despite plenty of warning beforehand.

These examples became such huge problems because, even over a year after launch, Fallout 76 still doesn’t have an anti-cheating system common at the launch of most MMOs, despite the community’s continual requests. Just another example of Bethesda’s incompetence.

Given Bethesda’s patches and updates to Fallout 76 have a history of breaking more than they fix – like that time they made reloading reduce your armour – I have no doubt we’ll be writing about Bethesda’s screw ups again in April.