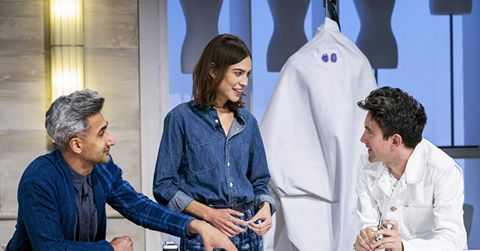 Other than Eurovision, I’m not one for talent competitions or reality shows (X-Factor 2012 was probably the last time I followed a series properly). So boy oh boy, was I surprised when I became totally and completely hooked on Next in Fashion, Netflix’s newly released reality-TV-competition-fashion-show.

Hosted by model-turn-fashion designer Alexa Chung and Queer Eye’s Tan France, Next in Fashion sees sixteen talented designers compete for $250,000 and their own range stocked on netaporter.com, so you could say the stakes are fairly high.

The first thing that’s great about the show is its format. The first half of the series featured the designers working as teams of two to compete against each other, with some of the pairs being made up of best friends or past collaborators, while others had never met until the show.

The team dynamic was interesting as it showed the struggles faced by groups with major creative differences, as well as the genius born out of designers working together to fuse their styles and create some amazing garments.

These team names are ᴇᴠᴇʀʏᴛʜɪɴɢ.

Halfway through the series, however, the pairs remaining in there were then separated to compete individually. This refreshed the format by making the second half of the series feel different and less repetitive whilst simultaneously exploring the contestant’s individual styles and exposing what that particular teammate had individually brought to their pair in the previous episodes.

Each week also focused on a different theme, such as athletic-wear, denim and suits. Again, this was a smart move as the show constantly changed, whilst compelling the designers to display a variety of skills across the fashion industry, often leaving their comfort zone to create garments they would never usually make.

Fashion has a new duo.

Tan and Alexa both host and judge the show, alongside a range of guests from within the fashion industry. The pair also present style tip segments within each episode, centred on that week’s theme; I didn’t find these interludes too helpful or entertaining (perhaps because I am already a fashionista…) as the competition part of the show was by far more interesting.

Tan and Alexa’s chemistry was evident, though at certain times it felt forced creating a ‘cringe’ moment. Nonetheless, it was entertaining to see the relationships between the judges and the contestants develop as the competition progressed, and it was clear that both Alexa and Tan were just as invested as I was in every contestant success.

They infused their experiences, ethnicities and expertise into their individual styles to set themselves apart

The true highlight of the show is the designers themselves. The sixteen contestants are from across the globe (the UK, the USA, South Korea, Mexico, China…) and all have varying degrees of experience within the industry, with some already running their own label, others frequently dressing celebrities, some freshly out of prestigious design school, while others were self-taught.

The future in fashion is (almost) HERE. Swipe for your first look.

Having designers from a range of backgrounds made the show more interesting, as they infused their experiences, ethnicities and expertise into their individual styles to set themselves apart and distinguish themselves through impressive designs. To say I grew attached to my favourite contestants is an understatement (no spoilers but when one designer in particular reached the final, I may or may not have punched the air in Hallward Library…). Each designer is so talented, and even those who leave the competition early still created some fascinating pieces.

I have noticed a new appreciation for fashion, most notably in the sense that I feel more strongly than ever that what you wear really can be an expression of who you are and how you feel.

Another thing that made the show so much better than I expected was the judging. I expected this to be very subjective and wholly dependent on the tastes of Alexa, Tan and whatever guest judge or judges they had on. However, though this was of course true, I was pleased as my preferences as a viewer most often aligned with the comments of the judges, making the show accessible and much less preferential than I’d expected.

To Watch or Not To Watch?

All in all, Next in Fashion is great. It’ll get you hooked, and make you realise how talentless you are but it may even rekindle those childhood dreams of being a fashion designer (is it too late to switch degrees?). Since binging the show last week, I have noticed a new appreciation for fashion, most notably in the sense that I feel more strongly than ever that what you wear really can be an expression of who you are and how you feel. I’d recommend the series to anyone, whether you have a fondness for fashion, or are just looking for something completely entertaining to binge.

Featured Image Courtesy of Next in Fashion Netflix via Facebook. Main Images Courtesy of nextinfashion via Instagram.

The Evolution of the ‘Night Out’