On Sunday 8th March 2020, Impact reported from the pro-choice counter demo at Stapleford Care Centre. Peaceful rage: this week’s usual demonstrations were met with strong opposition, and the result was the stoking of a passionate dialogue about the ethics and history of abortion rights in the UK.

In recent years, the ‘40 Days for Life’ group have campaigned outside Queens Medical Centre by holding anti-abortion posters, handing out plastic foetuses and praying on the doorstep. As of this Lent period, the group have changed location to Stapleford to continue their protest as part of an internationally coordinated campaign. The pro-life group believe they are helping save lives by campaigning for the end of abortions.

Pro-Choice Nottingham are only running their counter protest on Sundays, while the health centre is closed, to ensure minimum disruption for patients and staff. The centre has numerous clinics and two GP surgeries – including a reproductive health clinic. Therefore, people use the centre for several different reasons, all of which of private and confidential.

Despite this, the ’40 Days for Life’ campaigners were seen to be wearing Go-Pro cameras outside the entrances. This is presumably for their own protection but it may come at a cost for members of the community that value their privacy when using these facilities.

The ‘40 Days for Life’ have described their campaign on their website: ‘it is a peaceful and educational presence. Those who are called to stand witness during this 24-hour-a-day presence send a powerful message to the community about the tragic reality of abortion. It also serves as a call to repentance for those who work at the abortion centre and those who patronise the facility.’

The counter demo was primarily organised by Pro-Choice Nottingham. However, Broxtowe Labour have announced their unequivocal support and will be joining the demo each Sunday. Former parliamentary candidate for Broxtowe, Cllr Greg Marshall, showed support alongside the Chair of Broxtowe Labour, Jane Marshall. 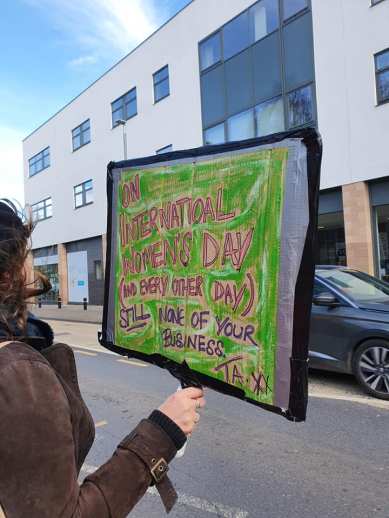 Katherine Harlow, protester and LGBT+/ 18+ Youth Officer of Broxtowe Labour, told Impact, ‘I think it’s absolutely disgusting that they’re here in Stapleford, yes they have a right to voice their opinion however, they’re not going to get anywhere by standing outside the college or the clinic, they should be lobbying our MP’s office or Parliament. They’re intimidating people who are trying to access legal services, not all of which are fertility related and they’re also intimidating young vulnerable students with learning difficulties who access the college that they’re stood outside of.’

Back in 1967, the passing of the Abortion Act gave women the access to safe and legal abortions. Further to this, across the United Kingdom, clinics have attempted to impose Public Space Protection Orders to remove pro-life demonstrations. Speaking to women at the counter demo, they feel as if this campaign is a marked attack on women’s reproductive rights and an attempt to limit women’s choices.

Darren Henry MP for Broxtowe made a statement about the protest on Facebook, saying ‘I completely understand what an incredibly emotive issue this is, and I appreciate the strength of feelings on both sides. The key here is that the right exists for LAWFUL protests. In my discussion with Inspector Simon Riley, I was reassured that police are making regular patrols to ensure protesters from both sides remain calm and that neither party harass one another or go on to cause criminal offences. It is also important that everyone not included in said protests is free to go about their daily life.’

“It was cold, it was rainy and there was no shortage of unpleasant encounters with the anti-choicers”

When pro-choice activists attempted to communicate with the ’40 Days for Life’ protesters they were told, ‘your hearts are filled with hatred.’ ‘It was cold, it was rainy and there was no shortage of unpleasant encounters with the anti-choicers’, Sophia Buxton, protester and 16-14 Youth Officer at Broxtowe Labour told Impact. ‘But we will not stand by and allow the rights that so many women before us have fought for to be eroded so we will be here same time and place next week!’

The ‘40 Days for Life’ campaign and counter demos will be running every week and further information from both groups can be found here:

UK Festivals – Where Are All the Women?