Rachel reflects on her experience attending a lecture by artist Mat Collishaw and previewing his exhibition at Lakeside Arts.

Push aside a thick, black curtain, step into near-complete darkness and turn a corner to suddenly find yourself in the presence of a truly stunning illusion – Albion (2017). An icy, crystal-like oak hovers gently at the end of the room. Simultaneously strong yet spectral, Albion is a vision of natural yet technical beauty. 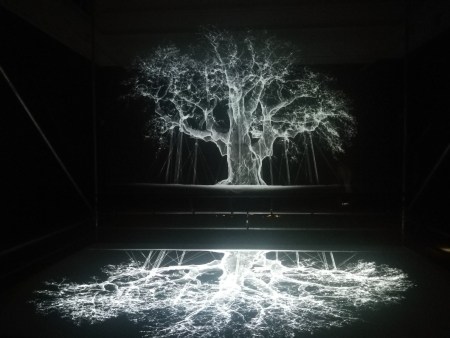 Against a background of black, its ghostly trunk and wide-reaching canopy of nerve-like branches stand above a reflection of its own image. Welcome to the first room of Mat Collishaw’s latest exhibition at Lakeside Arts.

This chalky apparition was created by laser scanning Major Oak, the biggest oak tree in Britain. Rooted in Sherwood Forest for over 800 years, efforts have been made since the Victorian era to prolong its lifespan by supporting its stretching, sheltering limbs with scaffolding. Held up so stiffly, it’s hard to perceive any movement during the tree’s 33-minute rotation.

“As Collishaw details in the lecture, many of his works comprise “a time element and a space element” – this exhibition changes the rigid “stop and look” way we often interact with art.“

This oak, despite often being used as a symbol for unfaltering strength, thus becomes a sad metaphor in Collishaw’s Albion: ‘it becomes a portrait of England – this mythical idea that everyone wants to believe in, which is perhaps something we should let go’. Using the same projection technology that was used in 19th century theatres to create ghostly effects in plays, Collishaw sheds light on the harsh reality of human obstinance that props up a tree like a puppet and forbids its death in the name of nostalgia or romanticism.

“It’s a myth,” Collishaw tells us in the pre-exhibition lecture. “It’s something that’s been devised.” 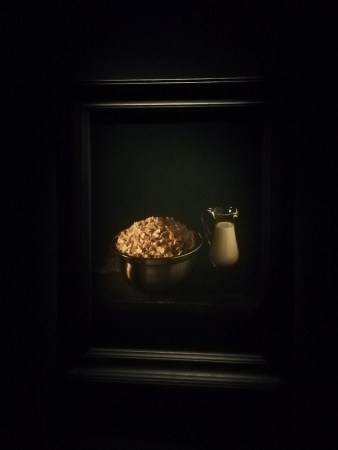 In the same room, seven black-framed images hang heavily on the walls, almost sinking into their shared darkness if it were not for the dimly lit subjects: a pile of chicken wings, a stack of toasted sandwiches, a bowl of cornflakes. Created in 2011, each work bears the name of a death row inmate – and restages their last meal.

“it is difficult to leave that first room without drawing a parallel between the two pieces – a parallel that hinges on the devastation that can stem from both preserving life and enforcing death.“

Faded colours meet chiaroscuro – an unsettling juxtaposition between light and dark. Collishaw therefore creates reference to the artistic tradition of the ‘still-life’, “a tradition that’s designed to make you think about things like the transience of life,” Collishaw explains during the lecture.

As such, these sombre pieces become reminiscent of 17th century vanitas that symbolically served to remind viewers of mortality and the worthlessness of worldly goods.

But, for Collishaw, it is more about humanity (or our lack thereof): the works function as “surrogate portraits of the executed prisoners,” and draw attention to the “strangely civilised way that we go about dealing with this act of execution” – as if, somehow, a meal justifies the barbarity.

While Albion and Last Meal on Death Row were not always intended by the artist to share a space, it is difficult to leave that first room without drawing a parallel between the two pieces – a parallel that hinges on the devastation that can stem from both preserving life and enforcing death. 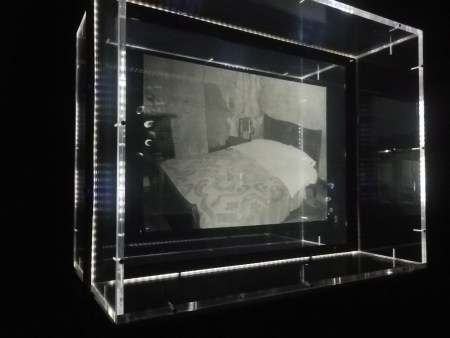 The darkness of the first room floods into the second, but not for long – flash! Bright bursts of light bite at the surrounding blackness as you approach the next of Collishaw’s works – ‘In Camera’ (2015).

At Birmingham Library, Collishaw was given the opportunity to look through boxes and boxes of photographic collections and, after sifting through many, he happened upon a box of negatives with no tangible theme: a messy living room, cuts of meat, a lone bed, a sea of stacked boxes. Eventually it became clear that these photos formed forensic evidence in criminal investigations during the 1930s and ‘40s. Intermittent flashes will enlighten your way through the room as you navigate between glass vitrines on stands in a grid-like layout. Flash! – with every click of light, the enlarged negatives, which have been printed with phosphorescent ink, will glow momentarily inside their glass containers, allowing you to catch a glimpse of them for but a few seconds before they fade once again, only for another one somewhere else in the room to light up. The flashing light mimics the flashes of police cameras in the search for evidence, a task that you yourself become a part of as you, at the heart of the action, attempt to examine each image before it disappears. As Collishaw details in the lecture, many of his works comprise “a time element and a space element” – this exhibition changes the rigid “stop and look” way we often interact with art. 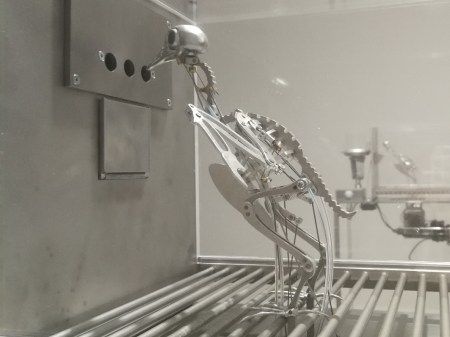 Linked by huge images of white birds lying lifeless in metal contraptions, the exhibition flows into the penultimate space where ‘The Machine Zone’ (2019) is displayed in stark contrast to the previous rooms with an almost clinical white light. Steel structures are topped with glass boxes containing animatronic birds, which, triggered by sensors, make repetitive pecking movements.

Metallic, industrial and sleek, this work is inspired by the research of American psychologist B.F. Skinner, who, during the 1950s through to the ‘70s, conducted experiments on pigeons based on invariable feeding – since they never knew when they would be fed, they developed addictions to pecking. Ever since, his findings have been applied to the impacts of social media which exploits a vulnerability in human psychology: likes, comments, shares and retweets have become the new ‘random reward’ that keeps us hooked.

“The birds flaunting their feathers become a symbol of Miller’s ideas that we project so much onto our exterior that, as the artist describes in the lecture, “we are left with an empty core.”” 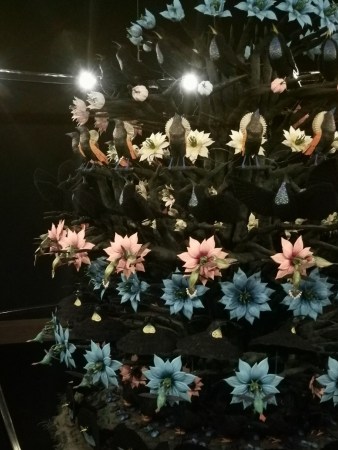 Collishaw also uses birds for social commentary in the last of his pieces at Lakeside Arts – ‘The Centrifugal Soul’ (2016) – which was inspired by the artist’s work with evolutionary psychologist Geoffrey Miller who believes that “we put too much of ourselves into our product facades, spinning too much mass to our outer edges where we hope it is both publicly visible and instantly lovable.” Collishaw takes the sense of ‘spinning’ very literally to produce a contemporary zoetrope – a Victorian optical illusion whose name means “wheel of life”.

Whirring to life, once again in the darkness, the zoetrope, animated by strobe lights, becomes an extravagant display of flowers and birds of paradise which appear to be moving since each 3D model is in a slightly different position to the one before. Flowers bloom and then close, birds twist and plume their feathers and come together to feed on pollen and nectar.

But, like each of Collishaw’s other works, this piece also has a point to make. The birds flaunting their feathers become a symbol of Miller’s ideas that we project so much onto our exterior that, as the artist describes in the lecture, “we are left with an empty core.”

“Some of these birds have also flown from the zoetrope to adorn the walls of the space by the gallery reception – be sure not to miss these.”

However, this is also about survival for birds – in this whirling ecosystem, they have only one cycle of movement. They can do nothing else. This behavioural pattern is programmed in them to ensure the survival of their species. But could ‘The Centrifugal Soul’ be seen as a microcosm of human behaviour, too? Do we still care about what’s inside?

Some of these birds have also flown from the zoetrope to adorn the walls of the space by the gallery reception – be sure not to miss these.

Due to Covid-19, Lakeside Arts has suspended all exhibitions and events until June. You can visit their website for more information.