Whilst the Covid-19 pandemic has left thousands out of work, chefs at some of Nottingham’s top restaurants couldn’t be busier – cooking thousands of free meals a week for vulnerable children, the elderly and NHS staff amongst the virus pandemonium.

Overseen by the newly founded non-profit organisation, Open Kitchens, local restaurants in Nottingham have pledged the use of their facilities to cook simple, nutritious meals for those in need. For millions of vulnerable people supermarkets, takeaways and even food delivery services carry a significant risk of viral transmission and as food banks struggle to meet an ever-growing demand, their access to nutritious meals becomes more and more uncertain. Through utilising restaurants which would have otherwise been closed, the project hopes to raise £1.85 million and provide one million meals to those struggling during the pandemic.

Despite only opening in November, chef’s at Yamas, a Greek restaurant on Thurland Street, are cooking 2,500 meals a week for the local community. “We’re doing beef stifado and vegetable moussaka”, head chef George Ktori told the Nottingham Post, “at the moment there are three of us in the kitchen as we need to social distance. The whole team of chefs have volunteered.”

In upcoming days, the meals will be delivered to the YMCA in the city centre, as well as to young people from the Nottingham Academy in Sneinton who would normally receive free school dinners. “We’re not used to sitting down doing nothing”, the busy chef doted, “a rest is nice but when we were told about the concept I said yes straight away.”

‘The restaurants are crowdfunding to raise £22,200 and cook 12,000 meals for those in need across Nottingham’

Chef’s at French restaurant Petit Paris, on King’s Walk, are also getting involved, pledging to cook 1,000 portions of coq au vin each week, whilst Hockley’s award-winning Bar Iberico are to be rustling up chorizo and bacon mac and cheese, pork and bean ragu, and vegetarian chilli and rice. Along with The Trent Navigation Inn in West Bridgford, which has also pledged its involvement, the restaurants are crowdfunding to raise £22,200 and cook 12,000 meals for those in need across Nottingham. 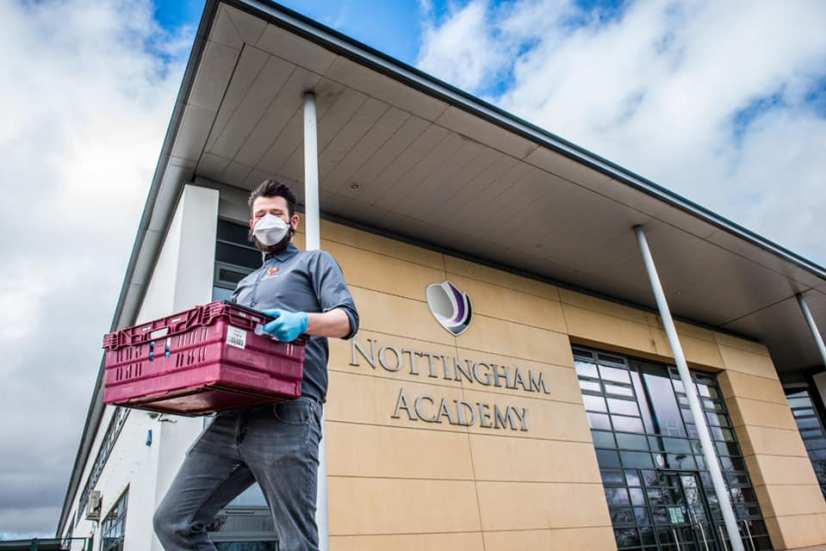 “Over the last nine days we’ve built a model and have brought together a team of 100 entrepreneurs and businesses in order to launch a not-for-profit venture that will save lives in communities across the UK by getting food to those who desperately need it”, Open Kitchens‘ founder Adam Roberts said. “Our aim is to get 10,000 restaurants reopened across the UK and crowdfunded via our own communities to make meals and distribute them for free to people nearby.”

Having spent twelve years building technology for restaurants and running Go Dine, an online restaurant booking platform, Roberts decided to use his knowledge of the hospitality industry, as well as new-found free time, to create “a national food solution”. Each meal is made on a budget of just £1.85, but in order to meet the demands of a nation in culinary crisis, far more restaurants must pledge their involvement and get cooking. Open Kitchens is also urging volunteers to sign up as ‘delivery angels’ to distribute the food, with the founder noting, “everybody involved is working flat-out for free to make this happen, but we don’t have much time.”

The newly launched website makes it possible to source your nearest Open Kitchen and fund meals at local restaurants directly, or instead donate to the nationwide Just Giving page, which since going live on 1st April has raised more than £5,000. With all of money received being split between the costs of re-opening restaurants and the ingredients needed to make meals, every donation is guaranteed to help make food one less worry for those worst affected by this ruthless pandemic.

The Nottingham restaurants currently involved in the project are Yamas Meze and Tapas, Bar Iberico, Petit Paris and The Trent Navigation Inn, and following the links will allow you pledge meals to each of these.

For more information on the project visit https://openkitchens.co.uk/.

Food And Mood In Quarantine

The unforeseen benefits of battling coronavirus