What Are The Starlink Satellites?

Many of us are very focused on what is down here on the ground that we forget what is above us. Unbeknown to some, there are a few new additions that have been popping up in Earth’s orbit over the past year: SpaceX’s Starlink Satellites.

SpaceX, as you may have heard from recent news coverage, is a commercial aerospace manufacturing company owned by the well-known Elon Musk. They state that some of their goals are ‘Making Humanity Multiplanetary’ and ‘Making History’, offering the details of various ongoing space-related projects. One of the projects, which is a little closer to home, is the Starlink Satellite project, yet it doesn’t seem to have been noticed as much in the media.

The project was founded in 2015 by the company, with hopes to place a grand quantity of satellites into orbit to create a network of satellite Wi-Fi across the world. The satellites, along with transceivers on Earth, have been put in place gradually since the first launch in May 2019. There are nearly 500 satellites currently in position and more than 11,000 to go. The main aims of this new type of satellite Wi-Fi, is for a higher speed, lower cost network that can also reach remote areas. As of recently, SpaceX engineers have stated that the constellation of satellites are producing 5 trillion bytes of data daily. Although the current quantity of satellites is enough to give a ‘basic’ coverage, the project still has a way to go before fulfilling all its aims.

The most recent Starlink mission was held in June this year, launching 58 new satellites into the constellation. At this rate of deployment, a ‘near-global’ service is estimated by 2021/2022. Information surrounding the project is limited as SpaceX chooses not to reveal too much too early—even the website doesn’t reveal much. It is known, however, that there have already been some software issues occurring, though it was possible to “debug it, figure out a fix or a workaround”. It does make the process somewhat one of trial and error. 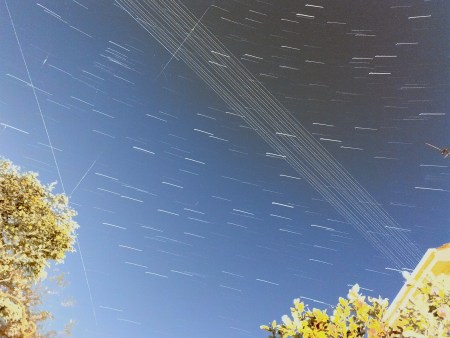 Unfortunately, astronomers are worried about the impact of having so many man-made structures in orbit. They block our view to other elements of space. There has already been some displeasure around the satellites ruining photos of a rare comet, as they are unavoidable. The photo above shows the trails observed due to the Starlink satellites when long-exposure photographs of the night-sky are taken.

Over the next few years these new additions may become easier and easier to spot as the constellation increases. Let’s hope the project lives up to the claims of SpaceX, so that the world can be better connected.

Featured image by Official SpaceX Photos from Flickr. Image licence found here. No changes made to this image.

In article image by Steve Elliott from Flickr. Image license found here. No changes made to this image.

Have People Been Reading More During Lockdown?