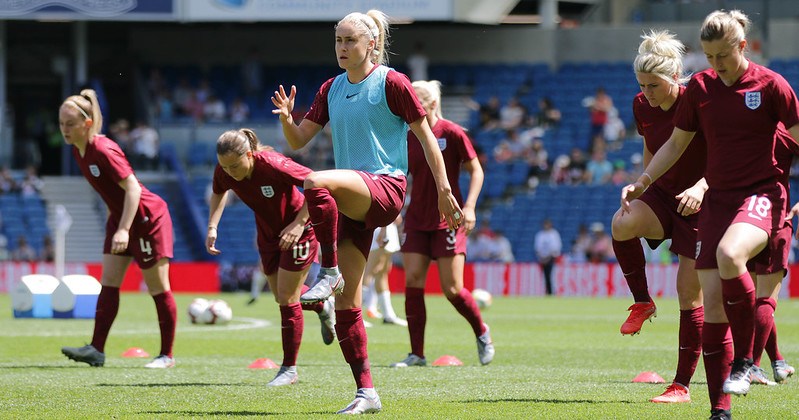 Having never played a game of football in my life, I may not be the best person to write this article – but I’m giving it a go anyway. I am a woman and I have a sister who has played football since childhood. Subsequently, my passive experience of women in the football world has led me to question how much progress has been made.

When my sister wanted to start playing football in the early noughties, she was told that there was no female football team. ‘Alright then, why can’t I join the boys?’ This innocent and logical statement was met with a tumult of sighs and eye-rolling, as having one girl on the boys’ team was simply impossible to a lot of people. Fast-forward seven years to when I was in primary school, and my PE teacher was begging me to join the tag rugby team because they had to have a girl on the team in order to play. So just based on our personal experiences, it seems the sporting world increased its opportunities for women and girls pretty drastically in a short space of time.

However, we then progress to secondary school. Again, I must emphasise that I was not a sporty person, and my school was not particularly sports orientated. However, my sister was a sporty person and the school could have recognised this and encouraged her to pursue her football goals (pardon the pun). Instead, she was told to ‘curb her enthusiasm’ for football. Whilst the boys were encouraged to get as muddy as possible playing rugby, or go on coaches to tournaments across the country, the girls were left on a rotation of trampolining, athletics and netball. The idea of a female football team may have been floated around, but never really got any traction. I suspect that this was largely due to the stereotypes surrounding female football players; no girl wanted to join a team when rumours suggested you had to ‘be gay’ or ‘look like a bloke’ in order to play.

My sister eventually overcame the obstacles she faced at school. She was able to join external football teams, and then the first division female football team at her university. This was a great achievement, but what concerns me is that she had to fight for this opportunity. Nowadays, I am hopeful that these barriers have come down and I think this is largely due to the increased awareness and enjoyment of women’s football. As The Guardian reported, England’s victory over Scotland in the Women’s World Cup was watched by 4.6 million viewers, compared to an average of 550,000 viewers of England’s matches in the men’s Cricket World Cup (as of 10th June 2019). So why the increased viewership? Well, a lot of people argue that women play the game better. Yes, their technical skills may not be as high, but they seem to stick to the rules more – men were booked for twice as many fouls as women from 2016-2019. The lack of time-wasting due to disputes with the referee or diving makes watching the women’s game a much more enjoyable experience.

If women do not get paid as much, this means they cannot dedicate as much time to perfecting the skill, as they must earn money in other ways

It is true that the female players are not equal in skill to their male counterparts, but we must ask ourselves why this is. For starters, in 2018, FIFA awarded £24 million to the teams in the women’s tournament, compared to a whopping £315 million to the men’s. If women do not get paid as much, this means they cannot dedicate as much time to perfecting the skill, as they must earn money in other ways. It also means that the highest quality coaches can’t be afforded.

So let’s circle back to the title question – how far have we come? On a positive note, I’d say that great strides have been made; women’s football has become more popular amongst the masses, meaning that girls can now see their role models on TV, and they are encouraged to play football from an earlier age. Whilst all of these are really important steps, the fundamental inequalities between the men’s and women’s game need to be addressed. Until women are paid the same as men and admired as much by society, women’s football will always be seen as a less capable alternative, rather than a brilliant game in its own right.

Featured image used courtesy of  James Boyes via Flickr. No changes were made to this image. Image use license here.

Postponing The 2020 Olympics Causes More Problems Than You May Think