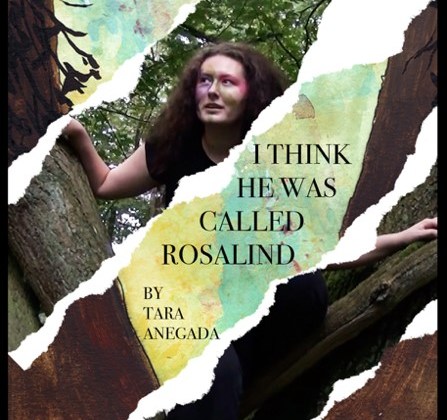 ‘I Think He Was Called Rosalind’ is an exciting soundbite of Shakespeare’s ‘As You Like It’ that will appeal to any lover of theatre with an interest in the philosophy of morality.

This play is an absolute credit to writer and director Tara Anegada, assistant director Chiara Crompton and producer Zoe Smith. Set in the Forest of Arden, the play centres around the made-up character of Fae, played by Sophie Curtis. Fae, a fairy with little understanding of humanity, witnesses and reacts to Rosalind’s trickery and manipulation. The play focuses on the universal themes of love and morality which leave you questioning your own experiences long after the play has finished.

Whilst this piece demonstrates the adaptive nature of great minds in the face of adversity, I simply cannot imagine this piece being different under ‘normal’ circumstances

Combining the on-screen role of Fae with two supporting voice actors (Rosalind played by Sofia Bassani and Orlando played by Pete Rouse) made this piece unique. Whilst this piece demonstrates the adaptive nature of great minds in the face of adversity, I simply cannot imagine this piece being different under ‘normal’ circumstances. Curtis’ ability to react to situations she could not see or hear was particularly impressive. It was easy to imagine the off-screen interactions, which was made even easier due to Bessani and Rouse’s impressive voice acting.

The character of Fae is an absolute triumph. She seamlessly blended into the Forest of Arden as an onlooker to the cherished events of the classic ‘As You Like It’. Curtis’ portrayal of Fae was strong and demonstrates her talent in portraying a range of emotion. I would personally love to see more plays inspired by Shakespearian comedies use a similar approach. Fae’s perspective as an outsider was exciting and accessible to anybody who takes the time to watch.

It was refreshing to see iambic pentameter utilised so well in new writing, which was poetic and was easier to follow than original Shakespeare plays. I also noticed aspects of the original text used which I felt were well selected and blended into this adaptation.

"I'm part of this forest." I Think He Was Called Rosalind, based on As You Like It by William Shakespeare. Premiering 09/09/2020 #nature #Fae #forest #trees #flowers #digitaltheatre #film

The only aspect that I personally felt unsure of was the makeup design. I noticed it emphasising the parts in the play where emotions were more heightened. But I felt like Curtis’ exceptional acting ability and Anegada’s phenomenal writing were already strong enough for the makeup to be distracting. Curtis’ beautiful hair really suited the character of Fae, although I felt that more could be done with the costume to tie everything together.

The setting of the forest was really relaxing, and the use of scene transitions with changing camera angles made for an exciting visual experience. The kaleidoscopic colour changes emphasised the whimsical nature of this piece. The video editing by Oliver Binns and Cody Bentham was really impressive, and I felt that it gave a similar feel to lighting in a theatre production.

It was refreshing to see iambic pentameter utilised so well in new writing, which was poetic and was easier to follow than original Shakespeare plays

The cast and crew have done a spectacular job of bringing a new take to ‘As You Like It’. ‘I Think He Was Called Rosalind’ is a truly exciting way to experience Shakespeare in a modern context.  I would urge anyone to head over to the NNT YouTube channel and watch it.

Featured image courtesy of The Nottingham New Theatre via Facebook. No changes made to this image.

In-article images courtesy of @rosalind_nnt via instagram.com. No changes made to these images.

If you can’t get enough of Impact Reviews, like our Facebook page for updates on our new articles.