Celebrating Black Athletes Who Changed The Face Of Sport 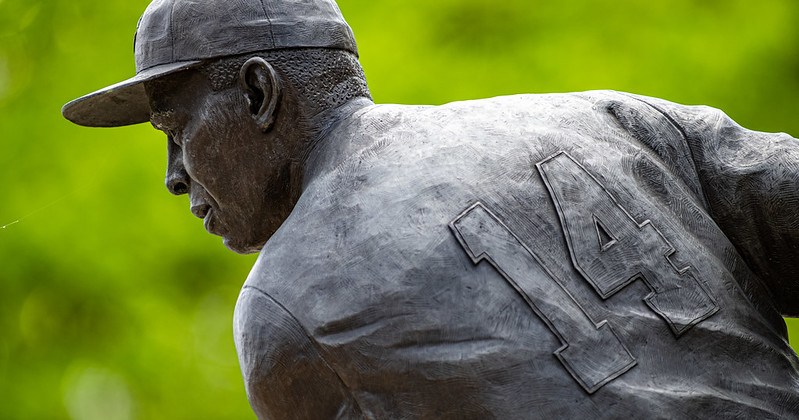 This Black History Month, Maya Israel takes a look at five sporting legends who have all made their mark on history. These athletes dominated pitches, tracks, courts, rinks and pools, often whilst elevating the social consciousness of sporting institutions and societies that were not built to accommodate them, nor made quick effort to do so.

These athletes’ excellence and hard work forced the barriers to success, paving a way for their successors on our televisions and in our newspapers today, many of whom are still publicly promoting the need for a more equal world.

Baseball Hall of Famer, Larry Doby, is one of the most famous centre fielders of all time. A seven time All-Star, with eight-20 home run seasons and five-100 RBI seasons, followed by a managerial career at Chicago White Sox – it is easy to see why he is so revered.

[Leslie] was the first female player to win the All-Star Game MVP, the regular season MVP, and playoff MVP in one season

Speaking of basketball, the name Lisa Leslie cannot go amiss. Leslie, who was picked by the Los Angeles Sharks at the inaugural WNBA draft, was the first female player to win the All-Star Game MVP, the regular season MVP, and playoff MVP in one season (2001).

In the next, the 6’5 basketballer became the first to dunk in the WNBA and scored over 3000 total career points, making her the all-time leading scorer at the time. Taking her talent to an international stage, Leslie helped the USA Basketball team to Olympic Gold four times.

Since her 2009 retirement, Leslie has become a head coach for Triplets and a sports analyst for leading sports channels. The combination of her accomplishments set her comfortably on the Basketball Hall of Fame.

Surya Bonaly is a French athlete who defied all expectations in figure skating, carving her own style into the ice in the 80s and 90s. Bonaly is best known for being the first and only woman to complete a backflip on ice, and was the first skater to ever land this somersault on one foot.

The ‘Bonaly’, as this move became known, did not win her a medal at the 1998 Olympics, where she first performed it, as it was technically ‘illegal’. However, it thrilled crowds and highlighted the athleticism Bonaly held that, as Mathewson puts it, the ice skating establishment ‘wasn’t ready for’.

Being one of the only Black faces in the figure skating world at the time and notoriously favouring more physically demanding moves over artistry made competition undoubtedly harder for Bonaly, whose style judges controversially claimed did not fit criteria. However, it was widely recognised that Bonaly was willing to push boundaries to progress her sport both institutionally and physically and she will not be forgotten for it.

Jesse Owens is perhaps one of the most famous track and field athletes of all time. His stardom is most often associated with his performance at the 1936 Berlin Olympic Games in Nazi Germany.

Not only did Owens dominate on the track, winning four Olympic Gold medals, but his attitude towards his German competitors, who, at the time, were supposedly proving the superiority of the ‘Aryan race’, was poignantly positive. Owens attempted to break down political barriers by befriending athletes such as Luz Long and for not letting racist Nazi ideology break his stride.

When we think of the female athletes who dominate the tennis court now, we think of powerhouse Serena Williams, the young Coco Gauff, the soft-spoken Naomi Osaka, but the primary trailblazer in the heavily segregated sport of women’s tennis was Althea Gibson.

Gibson was the first Black tennis player to win a Grand Slam Championship. She succeeded against all odds, having had to train on courts at night as a novice, and facing tremendous discrimination even when the US LTA was desegregated. According to Leslie Allen, Gibson still couldn’t use the locker room, enter through the front door to tennis centres or dine with other players.

There are many athletes like the five above who deserve to be remembered for their excellence. Stay tuned to read more articles about Black sporting history.

Featured image used courtesy of Erik Drost via Flickr. No changes were made to this image. Image use license here.

In article video 1 courtesy of WNBA via Youtube. No changes were made to this video.

In article video 2 courtesy of Netflix via Youtube. No changes were made to this video.

Isolation Meals: What Can You Eat When the Cupboard’s Bare?