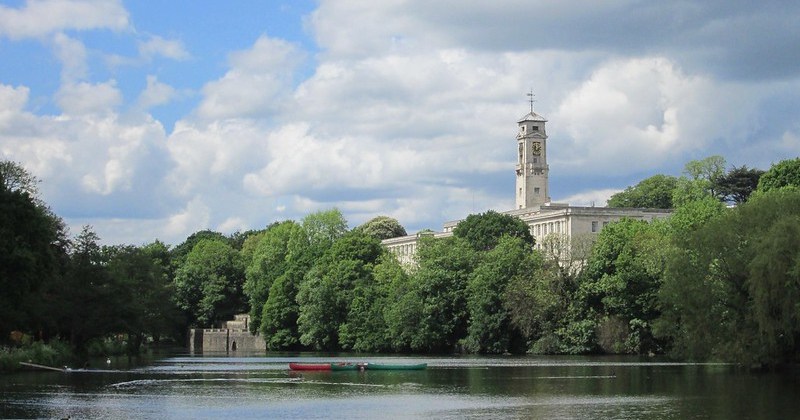 A view of the University of Nottingham's Trent Building from Highfields Park Boating Lake.
0 October 14, 2020 20:21 by Lauren McGaun

The University of Nottingham’s cases of Covid-19 have skyrocketed in the past weeks, and show no sign of slowing down. The latest data from the week ending 9th October show that there have been over 1,500 positive cases amongst the student and staff population of 45,000.

The number of cases now totals 1,530 amongst University of Nottingham staff and students, however this number is predicted to have risen since.

This data came just days before the Prime Minister, Boris Johnson, announced in the House of Commons a new tiered system for deciding restrictions.

Nottingham now has the worst rate of coronavirus infections in the country for the seventh day running, standing at 892 per 100,000 people. It has, however, been spared of the Tier 3 restrictions which were placed upon Liverpool.

The city was moved into the Tier 2 category, banning mixing between households indoors.

While cases are exceedingly high, the hospital system is currently not at risk of being overrun

One of the reasons that Nottingham was not placed into the Tier 3 section was, according to Council Leader David Mellen, due to the high student population. 75% of the positive cases were students which undoubtably puts more pressure on the University to get a hold of the high case numbers.

While cases are exceedingly high, the hospital system is currently not at risk of being overrun, which also influenced the Tier 2 decision.

This news of increasing cases in the University had been coupled with criticism of the procedures to help those self-isolating in halls. Many students have complained of poor treatment, and food deliveries not arriving on time, or not being sufficient.

Some students have, however, said the system was getting better in recent days.

New restrictions came into force on 14th October, but even these may not be enough to control the virus.

Featured image courtesy of Stephen Rees on Flickr. Image license found here. No changes were made to this image.

Celebrating Black Athletes Who Changed The Face Of Sport