Watch This If…You’re Struggling to Sleep 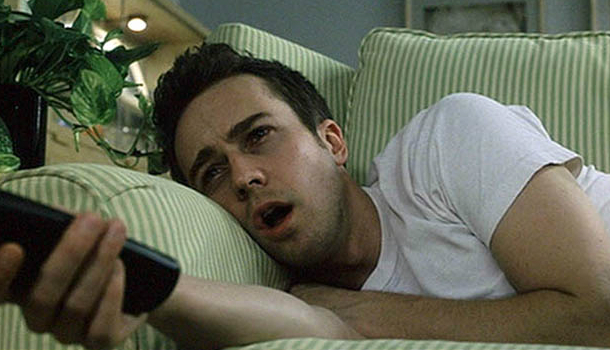 David Fincher’s 1999 cult adaptation of Chuck Palahniuk’s gripping novel of three years prior, Fight Club follows an unnamed Narrator (Edward Norton) living with insomnia, in search of emotional and spiritual expression to end his exhaustion with the comforting nest of Western modernity.

Our Narrator initially finds solace expressing his emotions when visiting support groups for various diseases despite living with no physical ailment himself. Mentally, the groups serve only as temporary alleviation for our protagonist in his pursuit of purpose. Consequently, he forms an underground Fight Club with Tyler Durden (portrayed by Brad Pitt), where men can consensually beat each other, making members feel more awake and alive than they ever have before. 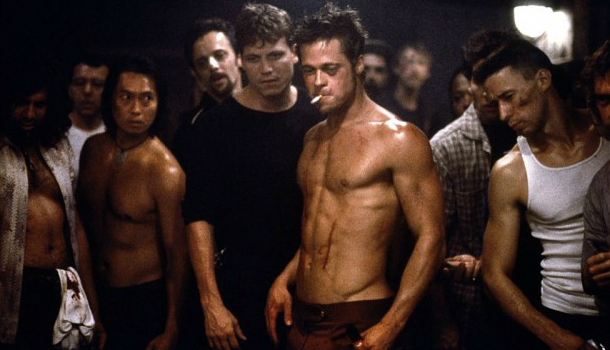 Fight Club is a phenomenal feat in filmmaking. Fincher captures the concrete concerns and criticisms of emasculation and consumerism in the Western world that Palahniuk’s 1996 work beats readers over the head with. In its translation to the form of film, Fincher invites the opportunity also for a substantial increase in satirical hypocrisy.

The unfortunate irony many insomniacs experience is being so fatigued with their condition, which then contributes further to an ever-growing struggle to sleep. This parallels with Fight Club‘s anti-consumerist overtones, that intentionally clash with its capitalist means of Hollywood production with “millionaire, movie god and rock star” Brad Pitt in a leading role, not to mention the mass-produced t-shirts and posters the film has inspired for its primarily nested audience.

This hypocrisy concerning the film’s message, and the concurrent ambiguity throughout is so oddly fulfilling that Fight Club will leave you feeling broken down during, and pieced back together at the end in such a satisfying novel adaptation, that you should be able to claim at least a few nights of sleep to better aid these early weeks back at university and your survival, but not in the hunter-gatherer sense of the word.

We can become so vividly accustomed to the modern world of university, employment and materialism that at times we need reminding that these things are not necessarily a natural state of being, but a socially constructed one of having. Fight Club is one such reminder, particularly for those of you overwhelmed by workload, deadlines, identity, modernity and internal beliefs of existential nihilism, to the point where you struggle to snooze, to the extent that it feels you’re just sleepwalking through the day. 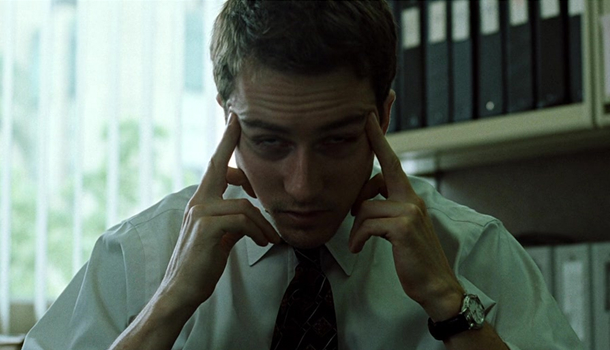 However, we’re not condoning opting for The Narrator’s psychosis and starting an underground Fight Club that turns into mayhem as a solution for sleeplessness. The fighting is a metaphorical backdrop, foregrounded for the wider issues of spiritual warfare, boredom and fatigue that The Narrator goes through.

Better advice to follow would be from the doctor he meets near the beginning of the film and instead seek healthy, natural slumber through exercise, and other outlets including watching worthwhile, valuable, enjoyable films like this.

Fight Club‘s irony, performances, narrative, grittiness, dark humour, visual style and quirks all work, fitting together so agreeably like the silence of night which comforts your rested ears upon a soft, sinkable pillow and your body cuddled by the warmth of a duvet (“Now why do guys like you and I know what a duvet is?”), which this film should accommodate for once watched due to its pleasing, paradoxical brilliance.

You can acquire the anti-consumerist film Fight Club in the most capitalist ways imaginable, most cheaply through online retailers such as Amazon. Alternatively, for the anarcho-primitivists among you, a copy of the video recording is freely available from The University of Nottingham’s Business Library’s lending desk on the Jubilee Campus.

The Five Stages of a Hangover