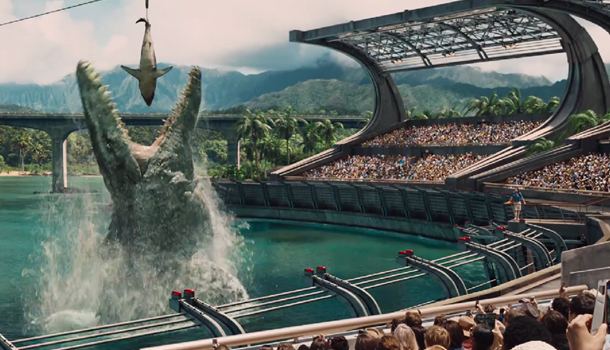 The fourth chapter in the Jurassic franchise takes place 22 years after the events of Spielberg’s original 1993 blockbuster, Jurassic Park.

We see the dreams of John Hammond have come to fruition, as Isla Nublar is now the world’s first operational dinosaur theme park, Jurassic World. We view the prehistoric nature reserve envisioned by Hammond in the first film, all shiny and wonderful, with the knowledge that all must come tumbling down.

People flee the island when a genetically modified dinosaur, that scientists happened to “cook-up” in their lab, escapes. Chris Pratt takes the lead as hands-on Dino Tracker, Owen. We see our hero thundering through the undergrowth riding his roaring motorbike alongside a pack of trained velociraptors, as they hunt down the highly intelligent hybrid in the trailer’s final shot, suggesting an interspecies coalition of unimaginable proportions.

Why have scientists played around making new dinosaurs considering the devastation caused in the first three films you ask? Well, because we needed a new Jurassic Park film, that’s why. With Ty Simpkins and Nick Robinson playing the obligatory kids in trouble, and Bryce Dallas Howard as the regret-filled scientist/chef responsible for the genetically engineered beastie, we have a popcorn plot ready to go.