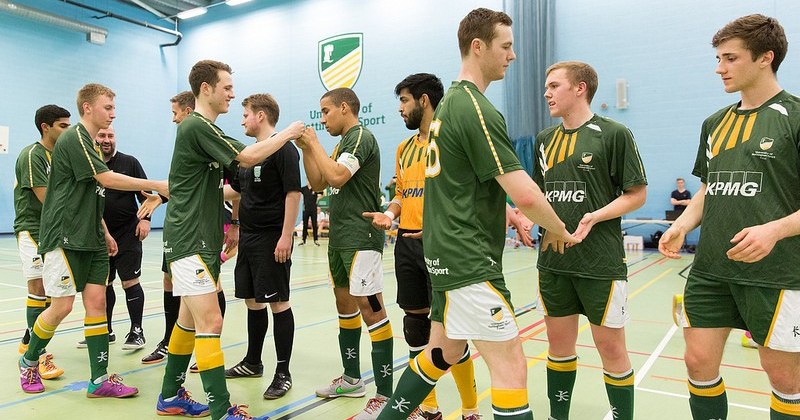 The University of Nottingham maintained their second spot in the BUCS (British Universities and Colleges Sport) rankings last week earning a total of 2097 points with a 54 per cent win rate.

Lauren Heria’s team of the week accolade was awarded to the women’s hockey sixth team for their emphatic 7-1 away triumph over Leicester’s seconds. The result has propelled the side to first position in league Midlands 4A where they are 6 points clear at the top.

It was a stand out week for the hockey club as a whole with two thirds of matches won, including the men’s thirds’ 10-2 victory over Leicester’s first team.

A very convincing win in a top of the table clash. Well done! #ThisBUCSgirlcan

Other honourable mentions went to our women’s and men’s basketball sides and our volleyball men’s firsts who won 3-0 away at Edinburgh. The team will be hoping for another victory this week to try and catch Northumbria at the top of the BUCS volleyball Premier North league.

In other matches, table tennis won all their fixtures last week against Derby and Trent, and they won 17-0 versus Warwick firsts. The fencing men’s and women’s firsts won 135-47 and 135-91 against Birmingham seconds and Warwick firsts respectively, while in tennis our sides won six out of seven matches, including a 10-2 triumph for the men’s fifths against Oxford’s thirds in a cup encounter.

Whilst the University of Nottingham maintained their second place spot after last week’s BUCS Wednesday, the green and gold slipped into third at the weekend behind Durham and Loughborough. Our Leicestershire rivals reached the summit of the rankings table at the weekend, accumulating a vast total of 2427 points.

The green and gold will need your support in order to claw our way back up the rankings this week. There are some mouthwatering clashes all over University Park and Jubilee Campus for you to attend on this coming BUCS Wednesday .

You can catch our badminton teams in action at Jubilee Campus from 1-7pm and from 4-7pm at the David Ross Sports Village. You can also watch the women’s basketball second team from 7pm at the DRSV to see if they can build on their 8-0 victory over Bedford last time out.

See if our football sides can continue their impressive starts to the season as the men’s seconds, thirds and women’s third team all kick-off at 2pm down at Highfields.

Also in action at Highfields are our men’s Rugby Union thirds who face a challenging test against Birmingham seconds at 2pm.

Meanwhile, arguably the fixture of the week comes to the DRSV at 4pm, as the men’s table tennis firsts take on Trent’s first team in what is set to be a titanic clash.

If you fancy an early match head down to the Nottingham Tennis Centre across University Boulevard for our men’s seconds’ and thirds’ matches against Leicester and Angela Ruskin from 12pm. There are also five volleyball games taking place at David Ross from 1-10pm.

Make sure you get down to some of these tasty fixtures tomorrow afternoon and evening all across University Park and Jubilee Campus. The green and gold will need your support to maintain their spot and try and climb back up the BUCS rankings.

A full list of the day’s fixtures is available in the Performance Sport section of the University of Nottingham BUCS website.