When I went to watch the new crime drama film Elle, I had no clue what it would be about. I guess I could say I was pleasantly surprised. Directed by Paul Varhoeven, this French film has won many awards, including the Golden Globe Award for Best Actress. I can understand why – Isabelle Huppert (who performed the protagonist, Michele) acted incredibly.

The film begins with a scene involving Michele (the CEO of a video game company) being violently raped, which sets the tone for how twisted the movie goes on to be. Throughout the beginning of the film, the protagonist tries to find out who the rapist is. It turns out that it is somebody eerily close to home – her neighbour, Patrick (Laurent Lafitte). As if that isn’t weird enough, she was already forming a sexual relationship with him before she found out who he was. 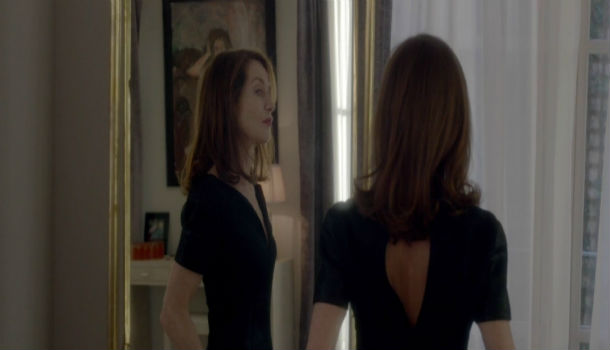 Of course, you would expect her to contact the police or at least do everything in her power to avoid seeing him. In fact, the opposite of this happens. She deliberately continues to see him, and engages in a sort of role play in which they attempt to re-enact the rape scenarios.

As you can probably tell, it was a very dark film, and I felt uneasy throughout it (but that wasn’t an issue for me; I love films like that). It was a bit confusing at times – I wondered why she kept seeing Patrick when she knew what he did, but that is a question Varhoeven leaves the audience to answer for themselves.

There were some particularly scary moments, like when Michele received texts from an unknown number referring to the rape. After an animation was emailed to everyone at work, she suspected that it must have been somebody she worked with. The animation involved one of their video games, a monster raping a girl, but an image of her face was placed on top of the original girl’s face. She still does not report the incident, as she had previous experience with the police involving her father, and rebuilt her life so people would not judge her for this any longer.

Despite the creepy atmosphere of this film, it was incredibly funny at certain moments (and I’m not just being weird, other members of the audience laughed too!). Michele’s son (played by Jonas Bloquet) has a manipulative girlfriend who he is constantly arguing with, and she has a baby which clearly isn’t his (as Michele puts it, he is ‘three tones darker’ than him and his girlfriend). However, he denies this and carries on as if he is the father. Another funny moment is Michele’s unpleasant reaction to her mother’s boyfriend, who is considerably younger than her.

Overall, Elle is an extremely dark, scary film, so it may not be for everyone. For me, I found it compelling as I enjoy films of a similar nature. It had an interesting plot, the acting was great and important psychological issues were explored.