Look Out For… September

As university creeps around the corner, September can be a mixed bag of emotions. So how appropriate that, in terms of cinema, audiences have such an eclectic range of choices!

The Victorian era is well represented by Bill Nighy’s The Limehouse Golem, about a series of murders supposedly committed by the mythical creature, and Judi Dench’s Victoria and Abdul, about that Queen’s motherly relationship towards her Indian attendant.

If you’d rather be scared out of your wits, the latest adaptation of Stephen King’s It or Darren Aronofsky’s mother! (a Rosemary’s Baby-inspired psychological horror starring J-Law and Javier Bardem) could do the trick.

Of course, with the Venice, Telluride and Toronto film festivals demarcating the beginning of awards season, some more highbrow productions are being released, such as the Domhnall Gleeson and Margot Robbie-starrer Goodbye Christopher Robin (depicting the creation of Winnie-the-Pooh) and the documentary Manolo: The Boy Who Made Shoes For Lizards, about the renowned designer. And if you’re still not satisfied, there’s even more to look forward to this month…

In this Yorkshire-set drama that’s been making the rounds at various film festivals, a young sheep farmer must provide for his ailing family. When the pressure becomes too much, he reluctantly takes in a Romanian migrant worker – but soon reluctance turns into something more, as both parties must come to terms with their feelings.

With a Brokeback Mountain-esque tone, this could either be heart-warming or heart-breaking. Let’s hope it’s the former.

A Sundance breakout, Patti Cake$ stars Danielle Macdonald as a white woman who is seeking fame and fortune through rapping.

Judging by the trailer, this appears to be an intimate look into Patti’s journey through doubt and introspection to success. If the track record for previous underdog stories – such as Rocky and A League of Their Own – is to be trusted, then this should be a well-loved film.

Macdonald has a tough job holding Patti Cake$ together as its eponymous character, but according to early reviews, she does so with aplomb. In fact, 2017 is shaping up to be a great year for her, having also been involved with Greta Gerwig’s first solo outing as a director, Lady Bird (out in November).

While he may have achieved moderate success as an actor – appearing on three seasons of Sons of Anarchy – it’s as a screenwriter that Taylor Sheridan has come into his own. First with Sicario, Denis Villeneuve’s drug-busting crime-thriller, then with last year’s neo-Western Hell or High Water, which saw him nominated for his first Oscar, Sheridan now turns to directing his own work with Wind River.

When Cory (Jeremy Renner), an agent for the US Fish and Wildlife Service, discovers a woman’s body in the remote Wind River Indian Reservation in Wyoming, he must work with FBI agent Jane Banner (Elizabeth Olsen) to solve the crime.

Wind River seems to share a sense of careful examination with its predecessors, as this takes a closer look into an otherwise isolated community rocked by a horrific event. Although it may not have the same hype that surrounded Sheridan’s previous work, this should be an intriguing watch.

Perhaps the least well known of these films, Sarmad Masud’s My Pure Land follows the story of three women – a mother and her two daughters – who must protect their home against armed intruders.

Set in rural Pakistan, this might not be the stereotypical film expected from the Indian subcontinent, however it promises to be a fascinating story set in a country still rife with gender inequality. 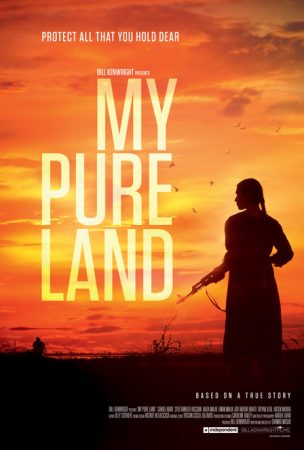 Poster for My Pure Land by Sarmad Masud.

In stark contrast to My Pure Land, Matthew Vaughn’s sequel to his 2014 spy-comedy hit is finally being released this month, after several trailers and previews.

This time around, we see our favourite secret agent, Eggsy (Taron Egerton) having to team up with his American counterpart, Tequila (Channing Tatum), a Statesman, to bring down a criminal mastermind (Julianne Moore). Of course, Merlin (Mark Strong) continues to mentor him, but it seems as though a certain deceased colleague may be deceased no longer…

The Great British Bake Off 2017 – Soggy Bottom or Well Risen?