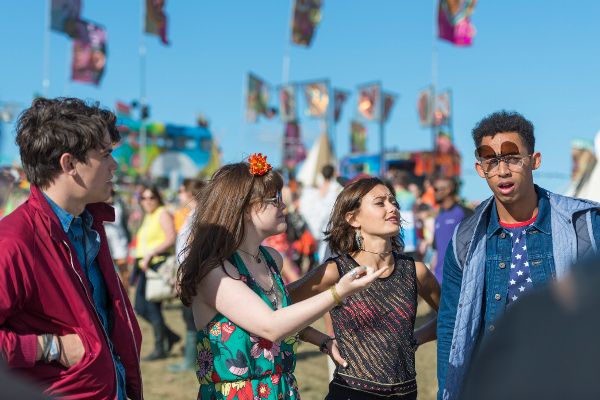 A film about coming-of-age, escapism and above all music, Access All Areas is a loud and colourful explosion of atmosphere that aims to hit a nostalgic note inside the minds of its audience, and conjure up memories of long golden summers of youth and discovery. Filmed over this year’s Bestival on the Isle of Wight, the movie has no shortage of ambitions.

The story follows a quirky gang of teenagers labouring their way through a small-town summer with dull mid-day drinking sessions and part-time jobs. Our leading man, Heath, played by newcomer Edward Blumel, after an unexplained spell of prison time, is working in the restaurant of the father of his friend and love interest, Mia. Mia (Ella Purnell) however, still reeling from the recent loss of her mother, is highly erratic, often drinking and staying out all night, much to her father’s worry. When Mia and her friend, Natalie (Georgie Henley), run away to a nearby music festival, the Isle of Sounds, Heath, under strict orders from her father, and his best mate Leon (Jordan Stephens) set off in hot pursuit to get her back, with the added intention of searching for their idol and rumoured mystery guest, Kurtz (Jason Flemyng), a long time reclusive music legend and Syd Barrett caricature. The pair are followed vehemently by a worried duo of Mia’s father (Nigel Lindsay) and Heath’s unstable mum (Jo Hartley). From then on, we are presented with a rapid and vigorous weekend of excess coupled with profound moments of reflection.

Over the course of the film we see the characters navigate their way through young love, decadence and newfound freedom. Always earnest and energetic, the film’s script, written by Oliver Veysey penning his debut feature, manages to comically, yet tenderly, accurately convey the British festival experience; expect vomiting, hangovers and of course a crucial mobile in the Portaloo moment. Though there are a couple of moments of light drug taking portrayed, it’s hardly the British Dazed and Confused.

“With some ‘Apocalypse Now’ and even Shakespeare references”

What’s most impressive about the script is Veysey’s attentiveness to sprinkle some sub-textual depth throughout that really helps to create a world for his festival, with some Apocalypse Now and even Shakespeare references. Look out for a character named Caliban eccentrically welcoming people to the island, presenting the place as an immersive and mysterious “other world”.

“The songs are well chosen and irresistibly summery”

Arguably though, the movie’s best attribute is its soundtrack. Thanks to the author’s connections with a music producer, the filmmakers managed to avoid splashing most of the budget on licensing fees as many do – and boy does it show. Tame Impala, Royal Blood and even at one point the briefest of performances by The Who, are enough to reflect the sweeping sonic spectrum of today’s major music festival. The soundtrack is not just about getting the biggest names however, the songs are well chosen and irresistibly summery.

However, Access is not without its foibles. Much of the film is unable to escape the distracting reactions of confused festival goers in the background, despite the almost constant employment of shallow focus to minimize the issue. At times the film’s story suffers a little from emotional predictability, but most noticeable is an occasional lacking in complexity and prone to general coincidences in plot. The reason for this is undoubtedly the filming environment.

Director, Bryn Higgins, at a Q&A following the film, admitted that due to shooting on location at Bestival, there were many scenes they couldn’t do, meaning they stuck mainly to key plot points of the story and wasted little effort in many creative set pieces. Although this element of smash and grab moviemaking does come through, it is largely made up for by vivid and polished direction from TV veteran Higgins, capturing the colourful and spirited aesthetic of a music festival. Additionally, the end product is also aided by a host of fine performances by a young but hugely talented cast. The four young cast members do exceptionally well, coping with an (as anyone who’s ever been to a festival knows) ever-changing and frantic environment. In particular, Henley, a much older and less innocent Lucy from The Lion, the Witch and The Wardrobe (2005), who’s pedigree as the most accomplished actor out of the four shows.

On a low budget, in a difficult environment, and with a youthful cast, Access All Areas may not illuminate you completely, but will leave you with your foot tapping and at the very least succeeds in bringing a little bit of summer into the darkening autumn months.

A Pact Among Angels @ NOTTIFF