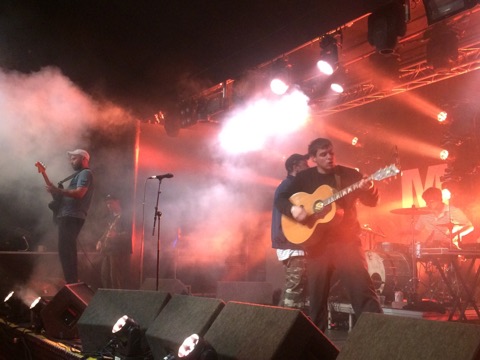 After my second time experiencing a DMA’s gig, I can now say with confidence that this is a band that is meant to be seen live. Though their first and newly released second albums both have a great deal of charm and character, you only really feel their electric presence once you’ve seen them command the stage and crowd.

As I entered Rock City at precisely 7:15, it suddenly dawned on me just how many different groups the trio could call fans, as although the crowd was predominantly boisterous youths wearing bucket hats and carrying a crushed can of lager, amongst them stood three middle aged mods smoking skimpy rollies, followed by two sixteen year old girls with their hair in matching braids and wearing matching denim shorts.

I managed to catch the second half of DMA’s’ Johnny Took’s brothers band Planet, delivering a similar sound to DMA’s, though with a more jangle pop take on Brit pop. Lead singer Matty Took glided around the stage looking like a young Kurt Cobain with great ease and charisma, whilst sharing a number of thoroughly enjoyable tracks, my particular favourite being ‘Save.Sold’. After Planet’s set, I managed to push myself to the front and luckily found a space holding the bar, if this hadn’t been the case I may not be here to tell the tale. As the crowd desperately awaited the arrival of Sydney’s threesome, the arena’s impatience exploded into utter moshing mayhem when DMA’s entered the stage, with the addition of three young musicians.

“Rock City had a pulse of its own”

The set began with a number of fan favourites, shortly followed by a few from the new album ‘For Now’; though the crowd may not have known the lyrics, they surely didn’t let the band down with their limitless roaring and  lack of care  whilst they threw themselves against one another with great force. DMA’s began to feed off the crowd’s energy leading to the room coming alive, and with the addition of a stage filling smoke machine and Matt Mason climbing the equipment, Rock City had a pulse of its own. During the slower tracks such as ‘Step Up The Morphine’ followed by ‘Delete’, the crowd tamed themselves and demonstrated a real connection with the band as they bellowed the songs’ beautifully mellow lyrics.

Throughout the gig, there were laughs to be had at the amount of cans and also CD’s thrown at the stage, reminding me of videos of the Stone Roses’ performance at Spike Island, who are evidently a great influence of the band as Tommy’s heavy, dangly movements mirrors those of Ian Brown. As a whole, lead singer Tommy exhibited a faultless vocal, his effortless range particularly shone in ‘Time & Money’, though it is unfortunate to say that Mason’s backing vocals were on the quiet side through no fault of his own. Johnny impressively brought alive the acoustic guitar, distinguishing the instrument from its modern day associations and quite frankly dull sounds of the likes of Ed Sheeran. A special mention also goes to the drummer who was in his own world, and as so, delivered a fantastic set.

As previously mentioned, DMA’s have successfully brought back the 90’s with their Australian take on Brit Pop, and if their upcoming tour is as electrifying as their opening show, I’m sure they’ll cause quite the stir, and who knows, may even become a worldwide name.