During our Students’ Union Elections Media Day on Thursday 28th February, we chatted to the candidates who are running to be elected as your Activity Officer for the 2019-20 academic year. Take a look at what they had to say. 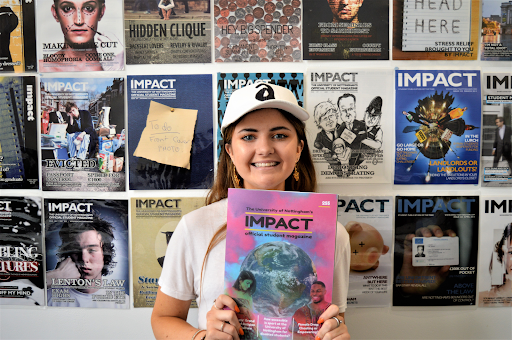 Ava is a third-year Politics and International Relations student from Essex who is running for Activities Officer.

Ava’s manifesto consists of five main policies. The first is a review of the STARs system which acts as a way for societies to gain recognition. She chose this policy as her priority, wishing to “mainly review this in the fact that it doesn’t really cater to Student Run Services”.

Her second manifesto point is “to review the room booking system which again there have been quite a lot of issues with.”

She continued: “Nikki in the office is the only person you go to […] there’s no real online aspect to it.” She believes that “it could be modernised and I really think that it needs to be”.

Her third point is to improve communications between the Activities officer and the SRSs (Student Run Services) by having “a dedicated monthly meeting […] I think we should just help support each other as much as we can”.

Her fifth and final point is “improving the benefits that welcome mentors receive.” Having previously participated in Welcome, she explains: “The only rewards welcome mentors get is a Crisis code and free entry to Ocean and obviously not everyone likes that.” She aims to introduce a discount for services such as Portland coffee, Spar and Mooch as “even something just as small as a bit of money off here or a bit of money off there is a good, realistic starting point.”

After stating that “if you believe then you can achieve”, Ava shared her slogan: “#shecandeliver because my branding is based on Amazon […] and #AforA (Ava for Activities) – pretty snappy” 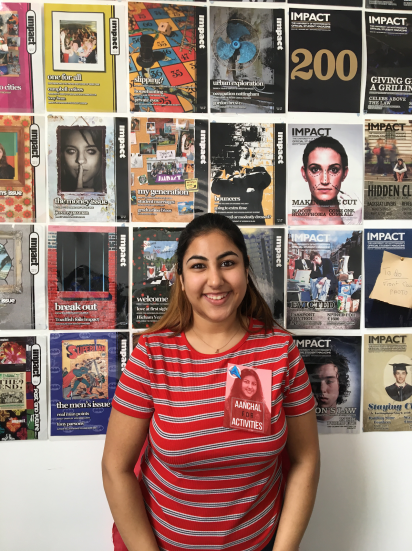 Aanchal is a third year Business Management student running to be Activities Officer. She is the current SU International Officer, therefore she feels that “I know what I’m doing and I know how to get it done. There’s things that I’ve been working on all year and I know how much time something takes to build up.”

“I’ve planned the International Festival Week and that’s something that I’ve been really passionate about. I have experience of planning and just general officer life as well.”

She expressed her wish to “take SU buildings to other campuses. That’s something that I’ve been working on as the International Officer. I want to build something like a global lounge or an SU hub on other campuses like Jubilee, which has barely anything.”

Aanchal wants “to make the SU more accessible. The SU website needs to be updated and it’s an urgent thing that everyone looks at.”

Alongside this, she hopes to “grow communication to channels other than Facebook. For example, a lot of students I have spoken to are not on Facebook.” To conquer this problem, Aanchal would like to use platforms like WeChat and Instagram for students to interact with SU Officers and find information. “I’ve been using WeChat and a lot of Chinese students use that.”

She also described that “campaign week is really fun. There’s so much excitement all the time. It’s making sure that people make the right choice with whoever they choose, there should be things that they want to see changed and improved.”

“Talking to people is something that I genuinely love. So that’s my favourite experience in campaign week”. 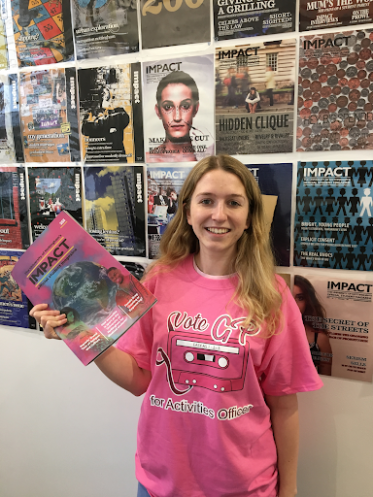 Georgina Pittman (GP) is a third-year English student who’s been involved in 11 student groups and 4 committees during her time at UoN and is running for activities officer. She’s had a lot of great opportunities but has also seen ‘the good, the bad and the ugly of the SU and different student groups’ and she finds it surprising how different all of their needs are.

Georgina wants to tackle the lack of recognition for SRS’ and student groups the work that they do at the University so she would like to raise awareness of it. Georgina’s looking forward to releasing her two campaign videos, one of which focuses on her going to different student groups and doing what they do for the day e.g., cheer, flare soc and synchronised swimming. She stated that it was “exciting to try new things and see how every student group is so unique.”

The main thing that Georgina would like to achieve is to bring recognition to the accreditation scheme STAR’s and wants to challenge and realign its purpose “amongst student groups as a whole or committees, who are we recognising?” To tackle this, she wants to expand STAR’s so that people can understand what it’s for, publicity needs to be there so that we can reward the students who work hard for their committees.

Georgina states that in an ideal world she’d like to put forward a scheme where students would have a QR code on their phone that they’d scan every time they get involved in the SU. This incentive will be used to encourage students to get involved more and strengthen the relationship between the SU and the student body. 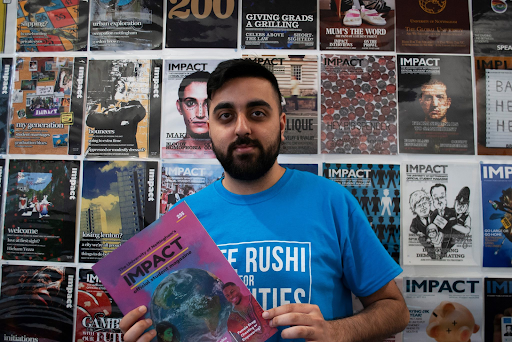 Rushi Pandit is a 3rd-year Economics student running to be your next Activities Officer.

Rushi’s main ambition is running for Activities Officer is to make the SU as inclusive as possible “I want to make sure there’s something for everyone. I want to help student groups particularly increase their engagement and number of signups”. He also wants to help recognise more student work in their societies, primarily by restructuring the STARS system so that current members of societies can reap the benefits of their hard work while they are part of the committee.

“At the moment the committee members who work hard to achieve a status, don’t actually get the benefits” as they are mostly third years and graduate at the end of the year. He also wants to extend a similar system to JCR committees.

Another important point for Rushi is working on better welfare support, particularly in regards to making feel safer. “I want to work closely with the welfare officer, meet with the council and see how we can work together, review student reports on bouncer misconducts at clubs, and work with commercial partners to see what can be done about this”.

Additionally, Rushi stressed his funding point. He wants to start a “sponsorship plan” so that societies can talk to commercial partners of the SU and get some form of sponsorships. “This can be about creating an event or having logos on t-shirts just to increase society funding through sponsorships”.

Rushi is currently involved in 5 different societies and is JCR president for Cripps Hall. During the campaign, he looks forward the most to meeting new people. 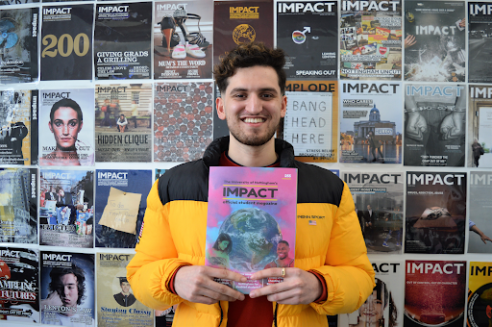 Ozan Khan is a 3rd-year chemistry students running to be your next Activities Officer.

Ozan has a number of policies including having an “open door policy” to boost communication and transparency with the officer. This would entail have set office hour times for anyone to pop-in and ask questions about anything regarding Activities. “Transparency is one of my biggest points”.

To further boost transparency and awareness in the student body about upcoming events, he plans on working towards introducing an “Activities” Tab in the MyNottingham University app which would have a list of every important university society events for student’s to easily discover what events societies are putting up.

He thinks this is the point in his manifesto he’d most like to push and realise. “A lot of people don’t check the SU calendar on the website, so just having it in the app and seeing what’s available this week would make life easier for a lot of students wanting to get involved in societies”.  He notes this would particularly be important for first-year students.

Ozan also wants to increase inclusivity within student activities. To this end, he wants to increase the number of charity events organised by the SU, and work in collaboration with different charity societies to make this happen. “I want to work toward having more charity events, charity weeks with societies or clubs or simply promoting more charitable work”. He also plans to promote more non-alcoholic events for students who choose not to drink.

His experience stems from similar roles he’s had at University, such as being the Social Secretary for men’s Futsal Club and being activities representative for Lincoln Hall in his first year.

He’s excited about the campaign process and especially filming and having people see his campaign video. 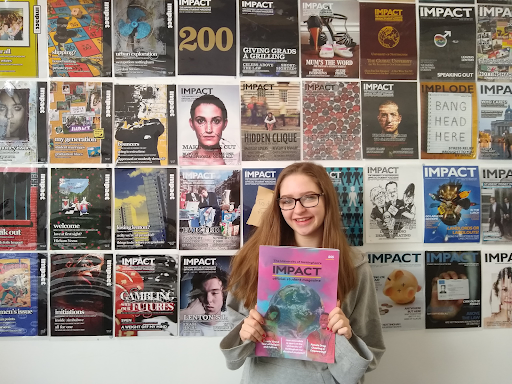 Emily is a 3rd-year Management student, running to be your next Activities Officer.

Emily has already served as a Lead Welcome Mentor, and is also a member of the university’s Welfare Network and Scrutiny Panel.

She has five main policies. Firstly, she wants to increase the visibility of the role on all campuses by creating a physical hub on Jubilee and by inviting Sutton Bonnington-based societies to the society’s council.

Her second point is to make welfare training compulsory for at least one member of every society. “I think it’s so important,” she said. “It’s crazy that’s it’s not already in place. It’s a priceless service.”

Communication and collaboration is highly important for Emily, so she intends to create a forum for presidents. “Currently they only have a bi-annual presidents meeting, which I don’t think is enough. I think [a forum] would be really helpful especially for newly-affiliated societies.”

Emily’s final goal is to increase the amount of out-of-hours support societies and clubs receive, and to make the support that the SU provides more flexibility.

Welfare is what Emily is most passionate about. ‘I think it’s nuts that it’s not part of societies already. Even if it’s not a new welfare role, having someone who also has welfare training is so important. You can work with other student groups to provide that training, which then expands on communication’.

When asked about the campaign process, Emily was proud to explain that her branding is based around The Incredibles, hence her ‘Emcredible’ slogan. “Being out there with everyone else who is campaigning,” is what she is most looking forward to about the week ahead. “It’s such a fun week, to get out here, talk to students, and answer people’s questions.”

“I think I’m very passionate about the job,” she told Impact. “I’ve got an in-depth look at how the officers work and what they do so I think that will be really useful in helping me know how to make change, how to enforce change, and how to work with other officers.”