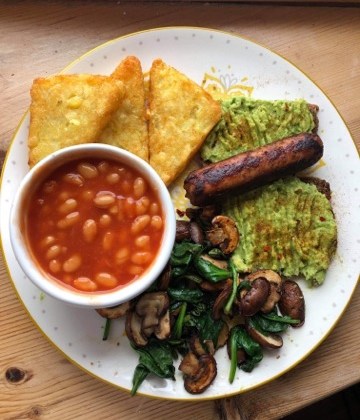 Deciding to go vegan for Lent did not arise from going puppy eyed over puppies (disclaimer – I really do not like animals), but from my shameless procrastination of trawling through the depths of Wikipedia for hours whilst pretending to be on Google Scholar in Hallward.

Apparently, sacrificing animal products from our diets was a trend back in the 5th century. If the Romans could do it for 40 days, even without vegan Oreos, then I could try it too. Living in Wollaton makes me feel like an outcast anyway, so the pity on people’s faces when I tell them I am vegan is pretty normal to me.

I was going strong until the weekend hit. The only thing that was suffering during the first few days was my eyesight. Squinting at every label in Aldi for dairy products has resulted in two things; an appointment at Specsavers and many bruises from the trolleys of irate omnivores for congesting the aisles.

Saturday morning almost brought me to tears as one housemate had made banana bread and another had a fresh delivery of lemon cake from her mum. After the tears had dried and I had filled myself up on rich tea biscuits, I set myself to work on a curry. The evening rolled around and my housemate, Emily, walked in with a bag of chips. As the human dustbin that I am, I swoop in when she reaches a carb coma. After dipping a chip in gravy and loving every bite, she decided to mention to my Midlander innocence that the Northern delicacy is made with meat?

A low point of my week was the never-ending cauliflower. My friend Kajal suggested making it into aloo gobi, a dish with tomatoes and spices which I could disguise my excessive amount of vegetables from my Aldi haul in. This was a turning point in which I started to ENJOY being vegan.

To make this I boiled about a quarter of a cauliflower for 5-10 minutes whilst I fried an onion, some leftover pepper, half a courgette and a few tomatoes in garlic, ginger, salt, pepper, cumin, curry powder and chilli powder. I added the cauliflower with half a tin of tomatoes and a handful of spinach. It came to the boil, and then I let it simmer for a few minutes until I felt faint with hunger. It was a good-sized portion with a bit left for either a lunch or to revisit later in the evening. 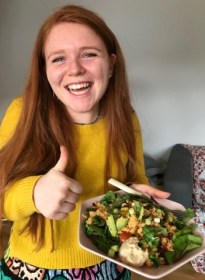 “feeling a little bit kinder to the environment”

As I end my first week of misery – sorry, I mean veganism – I am shocked at how I am still alive without crying and cradling a courgette in the corner of my kitchen. In fact, I have just eaten a salad?! And without being bribed. I hate to admit it but I am slightly enjoying my temporary lifestyle; the challenge of changing my typical meal of carbs plus cheese, feeling a little bit kinder to the environment and annoying impatient meat-eaters in supermarkets has at least added something interesting to my quite boring life that consists only of Shrek memes and Louis Theroux documentaries.

The moral of the story is you do not need to ‘find yourself’ in Thailand or forage for wild mushrooms to help the planet. Instead, put down the spicy meatball panini once in a while and go for something nutritional and plant based (or party rings?… Did I mention that they are vegan?…)

All images courtesy of Ellie Wall.

If you would like to write Food articles for Impact Lifestyle drop us an email at lifestyle@impactnottingham.com