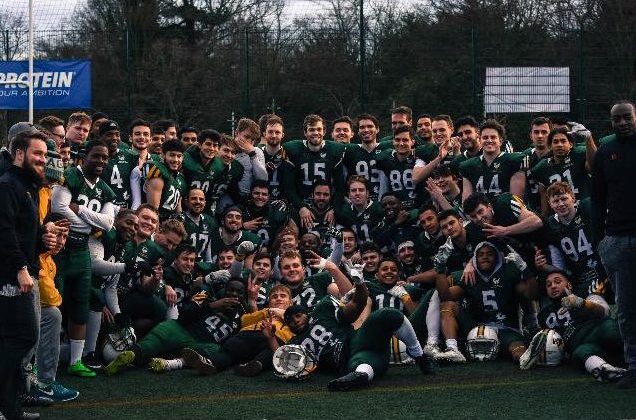 Varsity American Football takes on a different tone this year. After the green and golds got promoted to the Premier North last season the two sides haven’t faced off in any BUCS matches this season, making a change from last season’s four which were swept by UoN.

The two sides won’t be as well acquainted as they were in 2018, which means the game could go either way. The form guide would seem to suggest UoN have this in the bag, making it undefeated to the narrowest of losses in the Championship quarter finals, whereas Trent went on a mini playoff run to the semis after a third place regular season finish in the Midlands. However, as is the norm you have to throw these things out with Varsity. The seemingly lesser side could be the more up for it with a point to prove as opposed to a complacent side trying out some new things on autopilot.

The wait is over – varsity tickets are officially on sale now ?? Buy yours here: https://t.co/Tvrj22WiTP#GreenandGold #NottsVarsity pic.twitter.com/oxp6CEdILI

It particularly seems like the green and gold may be testing out some new blood here, with a couple of coaching adjustments for this contest and a turnover this year in terms of players. The pressure is on for UoN to keep their heads screwed on straight and get the job done when the game kicks off.

The advantage definitely still lies with UoN, even team members who might have had less BUCS minutes will still have played at the standard of a Premier division side. The green and golds will certainly have to be careful in this game though, Trent are entering Varsity from a good play-off run and will not make this easy.

The aspect of Varsity being a unique beast is also of course in play here, the game is at a neutral site, the two sides will be totally up for it for better or worse and in this case there isn’t any real sense of familiarity on either side which could swing it either way.

Top 10 Most Influential Rappers Under 30