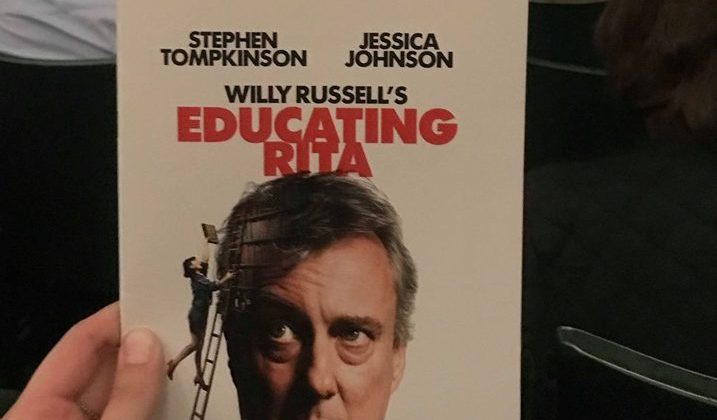 Directed by Max Roberts and written by Willy Russell, Educating Rita tracks the story of a working-class hairdresser, Rita into higher education.

Passionate, determined and fun-loving Rita (Jessica Johnson) meets her alcoholic University tutor, Frank (Stephen Tompkinson) at the beginning of the play. Rita, despite her lack of education, soon starts to take inspiration from Frank’s passion for literature. Over time, Rita’s ability improves drastically, with Rita adopting the bohemian student style that Frank detests.

The whole play is set in Frank’s office, with the use of an acoustic guitar accompanying the scene changes seamlessly. The set was beautifully designed, with Frank’s desk taking centre stage and including typical office items, as well as books littering the bookshelves and lots of knick-knacks being scattered around the set. The sheer detail of the set evoked a realistic representation of a English University tutor’s office. The detail of the set accompanied Frank’s passion and wealth of literature knowledge; he continuously gave Rita new books to read.

“Johnson and Tompkinson should be highly commended for their absolutely stunning performances.”

Johnson’s and Tompkinson’s acting was faultless, and particular credit should be given to Roberts for his excellent characterisation. Tompkinson adopted subtle gestures and mannerisms which made him an incredibly convincing University tutor. The blend of rich literary references and deadpan humour worked wonderfully and had the audience in constant hysterics, with the cast receiving a well-deserved standing ovation at the end of the performance. It was extremely refreshing to watch a production where the sole focus was on the pure skill and talent of the actors, and Johnson and Tompkinson should be highly commended for their absolutely stunning performances.

Costume Supervisor, Sam Newland should be commended for his excellent costumes. Frank changed costume twice, wearing various shades of brown and beige, which made him even more convincing as a University tutor. Rita’s constant costume changes coincided with her educational progression. Rita is dressed in loud jumpers, skirts and heels as she commenced her education, and adopted a more bohemian look in the second half of the show, which reflected her adoption of mannerisms and trends of other students. The utilisation of costume allowed one of the play’s themes to prevail: the play explores the extent to which working-class people can deviate from a path defined by their class, and thus the extent to which they can change their circumstances whilst maintaining their own identities.

“the production’s focus on working-class identities and the importance of education and social mobility are issues that are debated frequently today”.

The lighting, designed by Drummond Orr was fantastic. The stage was washed delicately, as well as gobos being used at the back of the set to imitate the windows of Frank’s office. The simplicity of the set permitted Johnson and Tomkinson to remain as the sole focus of the production.

Although the play was originally performed in 1980, Roberts’ direction meant that Educating Rita still resonates with a contemporary spectator. Despite having many references of its original performance context, the humour still came across with ease. Moreover, the production’s focus on working-class identities and the importance of education and social mobility are issues that are debated frequently today. In its exploration of these focuses, the production definitely gave the spectator food for thought.

Humour, the questioning of class barriers, and an exploration of the importance of education on one’s own agency – everything is to be found in Educating Rita, and I cannot recommend the production enough!