‘The Last Faust’ – An interview with director Philipp Humm

I recently had the opportunity to interview director Philipp Humm about his upcoming project, The Last Faust. And from the sounds of it, the 500 year old tale is about to get a lot more interesting.

Q: For people unfamiliar with the Faustian mythos, in a nutshell, could you break down the Faustian legend and your take on it?

At the core of the Faustian pact, lies the protagonist, Faust, selling his soul to the Devil (Mephisto). Faust is driven by a desire to emulate God’s omnipotence and knowledge. We have transposed this 500-year old allegorical tale of Faust’s pact with the Devil to Silicon Valley in the year 2059. Humanity is on the brink of extinction as Artificial Intelligence (AI) heralds a new dawn of technological superiority.

Our protagonist gets caught up in this buzz and is fooled into selling his soul to the Devil in exchange for power and technological ingenuity. Undeniable parallels can be drawn here between the greed of Faust and big tech companies, who enter a similar pact when they develop AI.

“The Last Faust explains the subtleties of the Faustian plot in a language we all understand; the language of tech.”

Instead of achieving unprecedented knowledge, Faust is overcome with lust. He seduces an adolescent Gretchen and the Greek Goddess Helena; ‘love stories’ which end in tragedy. Faust’s blind pursuit of hedonism is what made me think of Harvey Weinstein and ways in which we could draw elements of the Weinstein scandals into the plot of The Last Faust.

Q: What made you gravitate towards the Faustian mythos?

Faust is the most important work in German theatre and its second part is relatively unknown to the wider public. I wanted Faust to be accessible to the general public of today and not just exclusive to German scholars who are able to extrapolate meaning from the plot, which is pretty heavy going.

My first inspiration to make Faust into a film came after seeing an exhibition of Salvador Dali’s homage to Dante’s inferno in Florence a few years ago. I wanted to do for Goethe what Dali does for Dante. I didn’t properly get to know the plot of Faust until I was an adult but felt an instant connection with its messaging and its exploration of what it means to be human- a topic that has had my attention since my degree.

I think that Faust is the story of the 21st century and that unchaining technology will have to lead to a disaster. This is why I anchored The Last Faust in Silicon Valley

Q: What drew you to the setting of 2059 Silicon Valley as opposed to a straight adaptation of the text? What does this new environment bring to the table?

Faust has always been played as a medieval theatre play. I felt it was about time to dedust Faust and to land it in the 21st century. The temporal and environmental choices we made in The Last Faust are essential in capturing the attention of a younger, millennial audience, who were born into an evolving age of tech.

“The film will be released on all major online platforms like Amazon, iTunes, YouTube and Sky from 18th November. “

This is an audience who might be put off by medieval settings and archaic language and may not have the time to read Faust from cover to cover. I believe the messaging of Faust holds so much significance for these guys in particular. They’ve grown up in a world where there is this voracious thirst for technology. I think this can only end badly- we’re sleepwalking into a dystopian future where artificial intelligence, unfettered by human concepts of empathy, reshapes the planet in its own image.

The Last Faust explains the subtleties of the Faustian plot in a language we all understand; the language of tech. 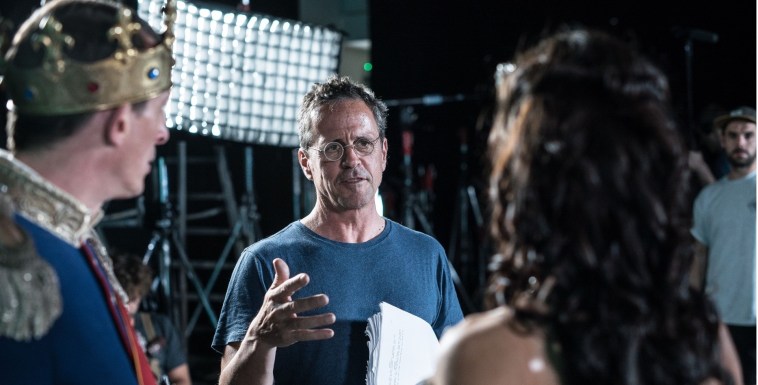 Q: How was your overall experience as a first time film-maker?

We had a great team and we were lucky – we had no major crises or illnesses. This was fortunate because we had no plan B if problems did arise – we were very lucky indeed!

I enjoyed the ride. In particular combining my artistic images, with theatre, dance and film.

Q: Are there any other projects that you’d like to make?

There are many. But we first need to see The Last Faust through. The Last Faust is much more then a film, it is a total work of art with over 150 artworks including paintings, photographs, drawings, sculptures and even a novella.

Q: Where can people see your film?

The film will be released on the 2nd December on the following platforms: Amazon, iTunes, Sky stores, Google, Microsoft, Wuaki and Vubiquity. It will be released in the UK, US, Canada and Germany, Austria and Switzerland. Prices are 7.99 SD and 9.99 HD. In the US/Canada they are 9.99 and 12.99.

Featured image and article images courtesy of Fabio Olgiati and Blake Roberts via The Humm Collection. Image use license here.

The Importance of ‘Hamilton’

Update on the Protests in Hong Kong