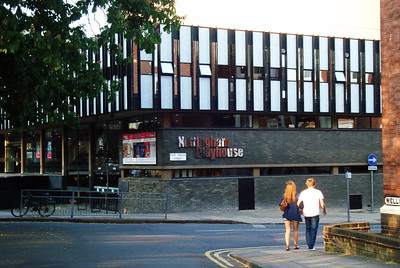 Award-winning actor Mark Gatiss will be making his return to Nottingham, starring as Jacob Marley in his own adaptation of Dickens’ classic A Christmas Carol. Gatiss, who previously appeared in the Playhouse’s sold out production of Alan Bennet’s The Madness of George III, is keen for the classic tale to return to its roots as a ghost story, rather than a traditional Christmas story. Appropriately, the show will therefore be playing over the Halloween season, from 30th October to 14th November, before transferring to London’s Alexandra Palace.

After playing the West End and Broadway, the Tony-winning play Choir Boy makes its regional UK premiere at the Playhouse from 12-27th February 2021. The gospel inspired play, a coming of age story following one student’s dream of becoming his school’s greatest choir leader, is another poignant tale of class by the Oscar winning screenwriter Tarell Alvin McCraney (Moonlight). Whilst the cast has not yet been confirmed, the audience at the launch night was still treated to a stunning rendition of two songs from the play by Ashley Samuels, supported by the Playhouse’s own choir.

Slightly sooner is the Playhouse’s production of Caroline Bird’s new play Red Ellen, playing from 6-17 October. The playwright herself was on stage to describe her lengthy research into the fascinating life of Ellen Wilkinson, a Labour MP who was the UK’s second ever woman in the British cabinet. Whilst some may be put off by the dense political subject matter, if Bird’s passion and knowledge is anything to go by, this is sure to be a fantastically lively and interesting production.

Other projects during the Playhouse’s next season include their kids show, Jack and the Beanstalk, as well as their highly-anticipated annual pantomime, which this year will be Beauty and the Beast. Bill Buckhurst, who directed the Playhouse’s recent production of Assassins, will be taking over from long-standing pantomime director Kenneth Alan Taylor.

“With something for everyone to choose from, the Playhouse’s upcoming winter season promises to be a hit”

With something for everyone to choose from, the Playhouse’s upcoming winter season promises to be a hit – and with so much fantastic theatre so close to the uni (often at very reasonable prices), it’s a great opportunity for students to support the local community whilst having a fun evening out!