Confused about (or perhaps even completely unaware of) the recent events surrounding the University of Nottingham’s Democratic Review? Impact’s reporter Aidan Hall gives a full summary of the events that went down; from the initial referendum on February 19th 2020, up until the recent Extraordinary Union Council meeting.

“What the hell just happened at the Students’ Union?” you may be thinking. And, truthfully, you’re not alone; it’s been a messy old time. At the end of the day, it was only the future of the whole union’s democratic structure that was on the line (eek!). Let’s start with some important context.

The events that led up to all the controversy started way back in 2019 when now President of the Students’ Union (SU), James Pheasey, was running for election. James ran on number of bold promises, but none proved to be more defining nor as intensely divisive than his promise to abolish the very role he was running for.

Why did James want to abolish the role of President?

James explained that the name ‘President’ suggested an inherent hierarchy amongst the SU officers. It was this hierarchy that was found too often to be an obstacle to effective governance of the Union. 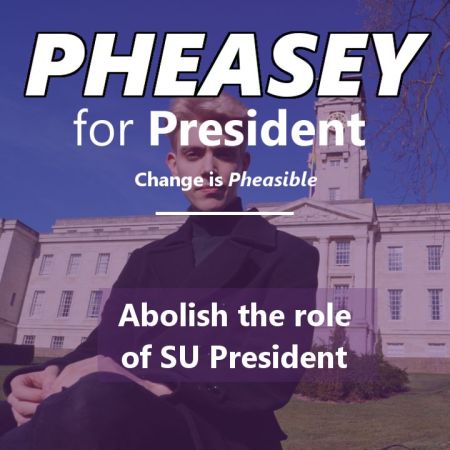 On the 9th of March 2019 James Pheasey was elected the SU President for the 19/20 academic year. Up against Louis Connor in the final round, James garnered 1552 votes in total. This was enough for James to return to university after the summer holiday as University of Nottingham’s President of the Students’ Union.

As mentioned earlier, James ran on the promise that, were he to be elected, he would abolish the role of President. In addition, James also wanted to take a closer look at and review the democratic model of the SU in its entirety.

“James, amongst other SU officers, had communicated their distaste for the existing hierarchies within the SU. The new model seemed much of a manifestation of this philosophy…”

In an interview with Impact on February 6th James described the Democratic Review as a “wholesale look at our democratic structure.” He went on to say that it was a way of “reviewing and reforming a way that enables students to control the union.”

What came of the Democratic Review?

After months of surveying and feedback groups, James and his team concluded that the SU’s current model was no longer fit for purpose. As a result, a whole new democratic model was drawn up. The minutiae of the proposed model go beyond the purpose of this article. However, a rudimentary knowledge of it is crucial in order to understand proceeding events.

James, amongst other SU officers, had communicated their distaste for the existing hierarchies within the SU. The new model seemed much of an manifestation of this philosophy, with the new model including an overhaul of all fourteen current SU officer roles, limiting the power of full-time officers.

The new model was designed around a number of themes. These themes were based on six key aspects of student life: Community, Education, Liberation, Sustainability, Union Engagement and Union Development. Each of these themes made up a ‘Zone’ that was designated a full-time sabbatical officer and was to be run though a ‘Zone Committee’.

In addition to this – amid concerns about the future of UoN sports under the new model – a full-time Sports Officer was also planned to work alongside the theme-based zone officers.

“Finally, and most crucially, there was to be no President.”

Within each Zone there were to be a number of Representatives based on the particular issues relevant to that zone. Some zones were set to have significantly more representatives than others.

All officers, including the additional five part-time non-Sabbatical officers were to be recognised as “politically equal,” again a reflection of James’ insistence to break down unnecessary hierarchy within the Union.

As Impact wrote back in February, the biggest change was seen in the decision-making process. A ‘Zonal Decision-Making Structure’ was proposed based on the zones outlined above.

Finally, and most crucially, there was to be no President. Instead, the ‘Union Development Officer’ was to sit on all Zone Committees but had no vote on issues relating to UoN SU.

All that was left to do was pass the new model through a student referendum.

On the 5th of February the SU announced that a referendum was to be held on whether to adopt or reject the proposed model. ‘Democratic Review 2019/20’ was now officially available to be voted on.

“A ‘Vote Yes’ sign even made it onto the ceiling of Ocean night club the week before the vote.”

Despite varying levels of frustration felt by students and the university media groups at the lack of clear information about the proposed democratic model, James and the SU officer team were seen providing information on social media.

A campaign supporting the new model was soon enacted. Signs were put up in the Portland Building championing the slogan ‘Vote Yes’. A ‘Vote Yes’ sign even made it onto the ceiling of Ocean night club the week before the vote.

There was no formally organised ‘Vote No’ campaign.

After much anticipation, on the 19th of February the referendum results were released. The Democratic Review motion had failed – miserably. Out of a total of 1,344 votes only 359 were votes for the adoption of the new democratic model. James’ plan had been strongly rejected by the student body

So, that was it right? Well, not exactly…

On the 20th of February, just a day after the results of the referendum were announced, the Democratic Procedures Committee (DPC) met.

The DPC’s role consists of changing, clarifying and updating SU bye-laws (the document that explains how the SU should be run). It’s made up of 8 elected members: 2 SU officers and 8 union members. This academic year the 2 officers are President James Pheasey and LGBT+ Officer Sam Hawkins. International Students Officer Denis Lelin and Community Officer Jacob Collier were democratically elected to the role as members of the union. The Chair of the DPC is student Athena Potsos.

The day after the meeting however, Community Officer Jacob Collier made a statement on Facebook concerning the content and actions taken in the meeting. Jacob was outraged at actions that had been taken by President James Pheasey, calling them “deeply undemocratic and wrong.”

In particular, Jacob was frustrated with the proposal of two motions. The first changed the role of President to ‘Union Development Officer’ and the other added a full time sabbatical ‘Liberation Officer’.

Jacob explained that these changes were obviously drawn straight from the democratic model that had just been voted down in the referendum. As Impact reported at the time, it looked as though changes were made by the DPC despite the referendum result.

Jacob also used the beloved medium of the meme to voice his disapproval.

Equal Opportunities and Welfare Officer Myles Smith-Thompson also took to Facebook on the same day to share his disappointment at the reported misconduct.

To add to controversy, after the DPC meeting it was also revealed that International Students Officer Denis Lelin had resigned from the DPC two hours before the meeting. He told Impact that he was uncomfortable with the two contentious motions, particularly because the referendum had been just the day before.

“After much heated discussion, Jacob called the committee a “sham” and left midway through”

So, what happened in the meeting?

Although released with delay, minutes from the DPC meeting were issued. They revealed a largely hostile and argumentative meeting.

Officer Jacob Collier was seen to argue against even the discussion of the two motions that resembled legislation seen in the Democratic Review.

After much heated discussion, Jacob called the committee a “sham” and left midway through. Committee member Charlie Gill had also left prior to this, saying that “they were completely there for liberation, but not for behind the door stuff.”

As a result, these changes are set to go ahead.

In light of the intense controversy surrounding the DPC meeting an Extraordinary Scrutiny Panel was announced to take place on the 5th of March. During the Scrutiny Panel James was set to face questions from both a selected panel of scrutineers as well as students within the audience.

During the panel James insisted that it had not been him who had proposed the Liberation Officer Motion but instead the chair of the DPC Athena Postos. Athena, in a full statement posted before the scrutiny panel was held, confirmed that it was the case and that she had proposed the motion against James’ advice.

In the same statement, Athena justified her decision by saying that the motions were both “fully valid” and had been discussed for months before so were not solely a Democratic Review idea.

James also explained that the motion to change the name of President to ‘Union Development Officer’ was different to the change proposed as a part of the Democratic Review.

The former was merely a change of name with very little change to the function of the role, with the later involving a significant functional change on top of the name change.

James was also seen explaining in the minutes of the DPC that his primary manifesto pledge was to abolish the presidency role and replace it with the Union Development Officer role. This promise was thus separate to the Democratic Review. In other words, it was going to happen anyway.

Throughout the scrutiny panel James admitted that his communication had been poor throughout the Democratic Review campaign. He apologised a number of times for this and commented that he intended to work on improving how he conveys information to the student body in the future.

4 days after the panel, on the 9th of March, the SU released a statement. In this statement the SU declared that the panel had found James’ actions were not in contempt of the result of the referendum. As a result, there were not sufficient grounds to bring a vote of no confidence against James.

Instead, the SU commented that it was “evident to us that poor communication has been a critical issue in this case and can be attributed to widespread misinterpretation of events.”

“Regardless, it is most definitely true to say that this democratic debacle has left a somewhat sour taste in the mouth of many students.”

So, the SU has said that there will be “no formal repercussions for the conduct displayed at the February DPC meeting.” Does that mean that’s it?

In terms of formal action from the SU and officers, it’s likely that it is. However, fallout as caused by the debacle is set to have longer lasting effects.

“Disappointed but not surprised,” Officer Denis Lelin posted on Facebook in response to the SU statement, alluding to his already eroded trust in the SU.

Perhaps James and the DPC did not act improperly. According to the scrutiny panel, they did not. Regardless, it is most definitely true to say that this democratic debacle has left a somewhat sour taste in the mouths of many students.