The Art of Acknowledging Our Histories

With stringent lockdown measures in place due to the coronavirus outbreak, our sanctioned one hour of exercise each day is a godsend. Nothing has calmed my anxieties more than getting out for a walk around the park on a regular basis. The white hawthorns and healthy, green trees are exactly what I’ve needed to see, as they serve as reminders beauty can still exist in a world blanketed by sorrow and loss.

It was a few weeks ago I began visiting the park routinely. As I manoeuvred my way around people to keep my distance, I came across an emblem of my adolescent years: the secondary school I used to attend. Made up of countless buildings, it’s sat behind a spinach-coloured fence for over eighty years, adjacent to an extensive patch of woods that has housed no end of smoking teenagers. 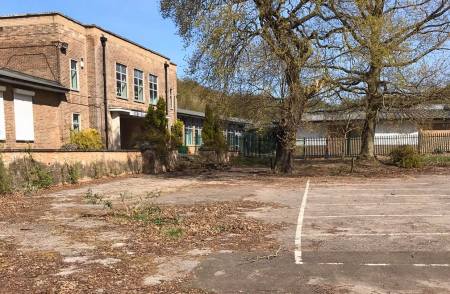 Being there that day was surreal because the school was empty. This emptiness was not due to the coronavirus outbreak, but due to the fact three years ago, the education board found a much more expedient site to teach the children on. In the timespan of about a year, six hundred students were relocated to a college building five minutes up the road.

Now, an unmanaged sea of leaves watches over the buildings and a neon sign attached to the fence reads “WARNING: POLICE DOG TRAINING AREA IN USE”. Of course, this isn’t the case. But vandals and urban explorers are less likely to enter the compound if they think confrontational German Shepherds might ravage them.

I started to walk along the perimeter of the now-abandoned site, snapping pictures as I went. The art room’s windows were suffocated under the wooden boards atop them. The glass panels on the gymnasium doors stood smashed and wounded. Crows called out on the overgrown, grassy banks but the only response they obtained was the hum of silence. 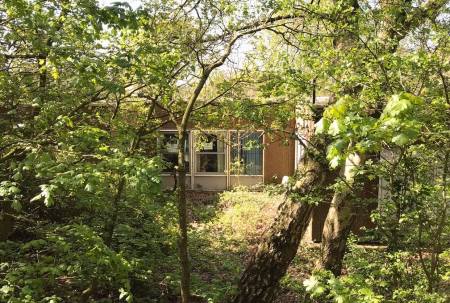 The more I examined the scene, the more memories burgeoned in my head.

I saw the D-shaped corridor and remembered the time my friend got into a fight with the school’s most infamous ‘mean girl’. I caught sight of the science block and remembered the disliked teacher who once sent eighty percent of her form group out in the timespan of twenty minutes. I saw the tannoy room and recalled the time my friend found a secret tunnel in there. She ended up uncovering archaic textbooks and documents from the 1940s, only to swiftly crawl back into the room when I told her a staff member was coming. 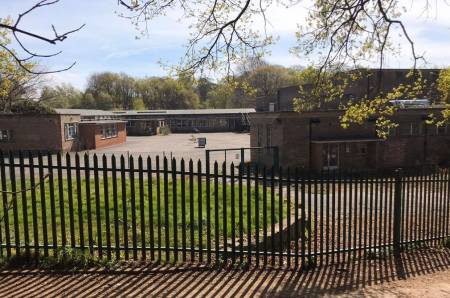 Even if some light-hearted memories surfaced that day, most of my memories of that place are far from pleasant. Up until the start of my final two years there, I was bullied for expressing myself in a way that wasn’t socially conventional. Then, during those final two years, depression and anxiety subjugated my higher mind and I spent the days in a kind of psychological twilight. Many of the teachers were blind to suffering, too. If you fell behind or became reserved, they’d just become angry at you for not making their job a walk in the park.

I stole one last look at the crumbling edifices and then turned away.

The inevitability of new life and the passing of barren, old ones

Upon travelling back home, I stopped to admire the last of the cherry trees on the streets. Their blossoms had become mangled at that point and had collapsed in on themselves, but the concept for which they stood for was still ripe: the inevitability of new life and the passing of barren, old ones. 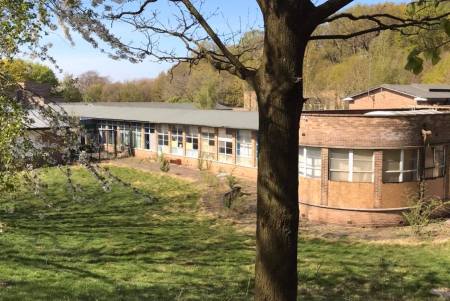 For many of us in our twenties, we look back on our school days with acidic recollection. They were borderline traumatic, and we’d rather forget the exam stress and questionable lunchtime food that was served to us. We don’t want to give even a modicum of our minds to the days spent in such a place.

Socrates said an unexamined life is not worth living. The statement itself is a little dramatic but the sentiment behind it is gorgeous: our lives develop meaning when we actively assign meaning to them.

If we approach our school days through a narrow lens, seeing them as nothing more than devilish footnotes in our lineage, that’s what they become. But if we shift our thinking and view them through a panoptic lens, we automatically see the bigger picture. We begin to view the days of our past as chapters in the colourful book of our lives. They become our history, and therefore, proof we have grazed this planet.

Truthfully, none of us can be immune to storms in life

We’re always trying to filter our existence here on earth. A healthy life is composed of balance, so we shouldn’t ruminate over events that have caused us great pain in the past. But by acknowledging their outplay every now and then, we’re able to check in with ourselves about how far we’ve come. Truthfully, none of us can be immune to storms in life. Even those who are blessed with million-dollar salaries and designer handbags will have encountered, and will continue to encounter, hardships.

When executed correctly, life is a long game. You don’t have the most fun in Monopoly when you’re reaching the game’s climax and it’s clear you’re going to win. The most joy is found towards the start of the game when the entity of mystery rules in the atmosphere. Trying to find shortcuts to more crystalline ways of living might initially seem like the most expedient endeavour, but in reality, it’s far from practical.

Featured image courtesy of  Ryan James Keane. No changes were made to this image.

In article images courtesy of Ryan James Keane. No changes were made to these images.

Lockdown: Is it Ever Okay to Break the Rules?