Are Urban Farms The Future?

Due to decreasing green space suitable for farming, and an increasing population, urban farms could be a great way to feed our expanding cities. Urban farming is not a new discovery. Nevertheless, only recently has it experienced increased interest and demand. In 2015, the urban farming industry was valued at $60 million. In 2018, this figure rose to $2.3 billion.

One major benefit to establishing urban farms is that they utilise space that would otherwise be wasted. Furthermore, the areas zoned for urban farms produce a high density of food within a set area in contrast to conventional farms. This could help reduce the demand of city-dwellers on rural spaces. Any urban land can be used to create an urban farm: shipping containers, brownfield sites and rooftops are all examples of locations that grow food.

Because the food from urban farms is grown and consumed locally, the focus is on the flavour of the produce

However, Pascal Hardy, owner of the largest urban farm in Paris, clarifies that only 5% to 10% of an urban population can be fed using urban farms. This is because essential foodstuffs like rice and wheat cannot be grown in this environment because of “their high requirements for both energy and space”.

Even though urban farms cannot cater for all food types, they do reduce consumers’ carbon footprints if used efficiently. Instead of the food travelling from afar, it is locally grown and sold. This idea of eating locally could also be an example for those who live in rural areas: to use farmers’ markets and independent shops to their advantage.

Another way in which urban farms help reduce carbon emissions is by growing food on a seasonal basis. Growing food out of season requires heat and energy; this also applies to growing food that is not native. Unfortunately, urban farms in the UK would be at odds with the weather: most produce that we import would not be able to be grown domestically without significant energy.

Because the food from urban farms is grown and consumed locally, the focus is on the flavour of the produce, rather than whether it can survive the journey from the farm to the supermarket. As mentioned before, producers do not need to worry about prolonging shelf life as the produce is bought locally. In comparison to conventional commercial farming, urban farming reduces the carbon emissions released due to the journey food takes from the producer to the buyer. 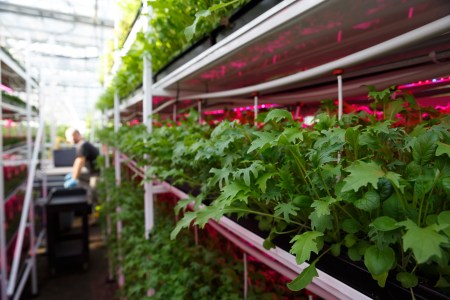 Hardy’s urban farm in Paris uses a system that recycles the water used to grow their fruit and veg. This “uses 90% less water” than conventional farming methods. Furthermore, the water that is recycled throughout the urban farm contains “organic nutrients, minerals and bacteria”. This means that no chemicals are used in the process: the food is organic. Recycling water is one of the ways that urban farms outdo traditional farming regarding being eco-friendly. Except, in certain cases the whole process might not be completely renewable due to some farms’ dependences on LED lighting that uses “municipal grids”. Additionally, the techniques employed vary from urban farm to urban farm; thus, it is not guaranteed that all urban farms are green and carbon-neutral.

Overall, urban farming shines a light on eco-awareness on a commercial scale and is an example of how people can make changes to their lifestyles and consumption habits. Yet, it is not without its flaws. It lacks food diversity because certain food types can only be grown in rural settings. Consequently, urban farms should be used in conjunction with responsible rural farming. Other community initiatives are also needed, like community gardens, to meet global demand, which is set to grow massively by 2030, when the projected global population will be approximately 9.7 billion. Urban farms are only a steppingstone in the path towards true food sustainability.

Featured image of the Grenpoint Rooftop Farm taken by Betty Tsang from Flickr. Image licence found here. No changes made to this image.

In article image of an urban farm in Montreal, Quebec by Lufa Farms from Flickr. Image license found here. No changes made to this image.

Have People Been Reading More During Lockdown?

Is It Our Responsibility Not To Travel Abroad This Summer?