We were lucky enough to catch up with Tee Peters and Nebula ahead of the charity concert, 'Live! for Lesedi', on Sunday 17th March at 31K Bar, Hockley

Education is perhaps something that many of us take for granted in the UK, especially for the majority of university students who have been in education for most of their lives. However, many individuals across the world are not as fortunate as us, and have limited access to education and schooling.

A group of second-year Architecture students have set up a wonderful initiative called ‘Project Lesedi’, with the aim of raising funds to design and build a school in Lesedi, South Africa. The team behind the project are running a fundraising event, ‘Live! for Leseli’, on Sunday 17th March at 31K Bar in Hockley, complete with live music and entertainment. Two performers, Tee Peters and Nebula, who are current students at the University of Nottingham, are performing captivating sets on the day, and Impact was lucky enough to get an interview with them!

What do you study and what year of study are you in?

T: I’m doing English with Creative Writing at the University of Nottingham and I’m in my final year!

N: I am a third-year Psychology student.

How would you describe the music that you perform?

T: I like to call most of my music “documentary music”; people say I tell great stories and capture moments in time vividly. My music is personal and stems from real life – although I do like to have some fun as you might find out while listening to me.

N: Haha I hate to be one of those guys but it really is hard to put the music I make into usual music categories. I will say, however, the music that I’m due to perform on Sunday at the show is my more rap-based heavy hip-hop stuff.

How did you first get into music performance?

T: When it was 16 I did a summer program called NCS and I was very shy. My group wanted to take part in the annual talent show as a dance group which I absolutely didn’t want to do. The morning before, at around 7 a.m. I literally woke up and started writing a poem. There was no premeditation on this, it was by some sort of driving force that even I didn’t understand. From then on I’ve been writing since.

N: I grew up in a Christian household so I was in my church’s youth choir from, like, the age of 8, so that was the starting point, and from there I’ve just been able to develop my own musical style and make more contacts to the point where I was performing my own original songs at the Royal Albert Hall at age 15.

What are your favourite genres of music?

N: I would say I listen to waaay more R’n’B than rap or anything else but those are definitely the top two.

Who are your favourite musicians at the moment?

N: Hmm I’m biased as these guys are in a rap group with me but my favourite artists are K.Ji, Archie Stephen, Mk-Tential and Tee Peters, all of whom are young, Nottingham-based and performing with me on Sunday.

Do you have an all-time favourite album? If so, what is it?

T: I couldn’t even dare to answer this but if I had to pick it would be ‘Good Kid Mad City’ or ‘My Beautiful Dark Twisted Fantasy’.

N: ‘My Beautiful Dark Twisted Fantasy’ by Kanye West. That album is nuts. When you pair the actual music with the position he was in within popular culture, it’s a whole phenomenon. Flawless album, top to bottom.

What attracted you to perform for the ‘Project Lesedi’ this March?

T: Honestly, Phoebe [the organiser], came to see me perform one night and she had a great energy about her. I then did some research into the night and thought that this would be a great cause to contribute towards.

N: I just think it’s a great cause really, I’ve known Phoebe since first year anyway so being able to help a friend who’s really trying to make a difference is awesome.

Have you performed at any other charity initiatives?

T: I actually haven’t, this is my first – maybe I should do more.

N:  Yeah quite a few to be fair. I used to do a yearly project called ‘Hear & Now’ in my hometown of Bedfordshire, where the youth choir I was a part of would come together with the Philharmonic Orchestra to put on a show of original material to benefit a group called ‘Music 4 Memory’, who worked with older people with dementia and helped them through their condition using music. Did that for about 5 years in a row, was always a great time.

Why do you think it’s important that initiatives like ‘Project Lesedi’ exist?

T: My whole thing is this idea of the journey – giving people opportunities to be better versions of themselves so that we can all prosper. I strongly believe that some of the most unsupported people in a given community have the potential to also be the hungriest for success. Building a school would facilitate that.

N: Any kind of charitable cause is always worth existing and supporting if they are truly aiming to make a change, but projects like this one are especially crucial as there is often a purported narrative that university students are only focused about partying and alcohol etc. etc. ‘Project Lesedi’ is a perfect example of the brilliant and philanthropic extra-curricular activities that a lot of students become involved in during their time at uni and a lot of people may not realise. 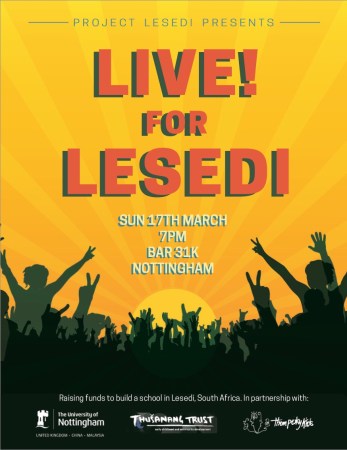 You can support ‘Project Lesedi’ by donating to the initiative’s Just Giving page here.