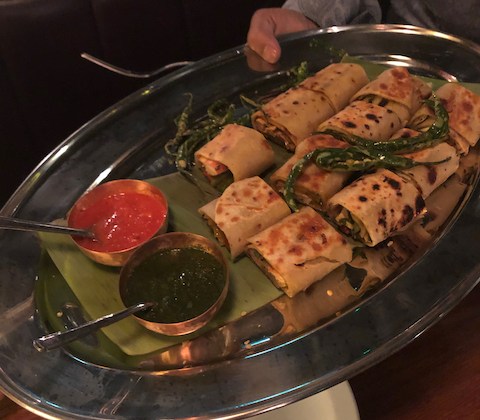 If you’re hungry for authentic and flavoursome street food or barbeque skewers, Nottingham’s newest restaurant, Burra Khana, is the place for you.

Nestled next to the Red Dog Saloon, by the Lace Market tram stop, this restaurant is re-imagining Indian food by combining the flavours found on the streets of Delhi and Jaipur with the chargrilled culinary treats of the Middle East.

this restaurant is re-imagining Indian food by combining the flavours found on the streets of Delhi and Jaipur with the chargrilled culinary treats of the Middle East.

Upon entering the restaurant, we were greeted by friendly staff who offered us some of their signature cocktails and mocktails to try. Each drink captured an essence of the food about to be served; the hints of rose in one evoked memories of Turkish Delight, whereas the balance of cucumber and ginger in another offered a refreshing hit, but with slightly spicy undertones. 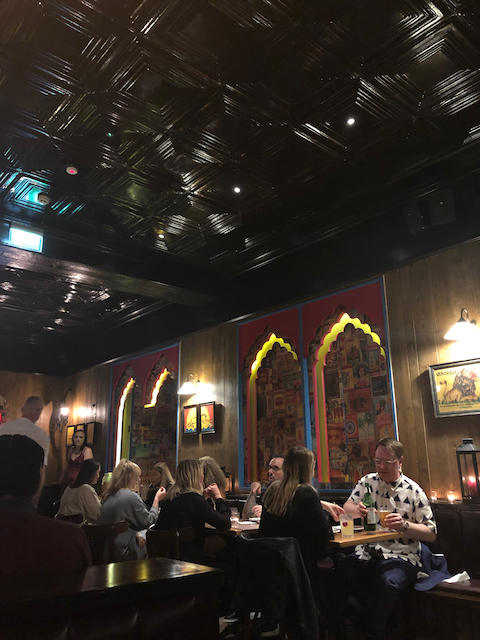 Looking around the restaurant, the dark wood and dimmed lighting gave the room a decadent, gentleman’s club feel. When the waiters approached offering samples of their favourite street food dishes on silver platters, it confirmed that the owners have tried to differentiate their restaurant from most other Indians in Nottingham. We got the impression that Burra Khana is aimed at a slightly more discerning crowd than those who just want a big ol’ bowl of anglicised curry and rice.

Having said that, the food we were served was delicious! It was obvious that the chefs had put a lot of thought into their flavour combinations, and that they had incorporated many traditional ideas into their dishes. The first food we tried, Mutton Belly Vindaloo Samosas, demonstrated their mastery of bold, Indian flavours in small, bite-sized snacks. 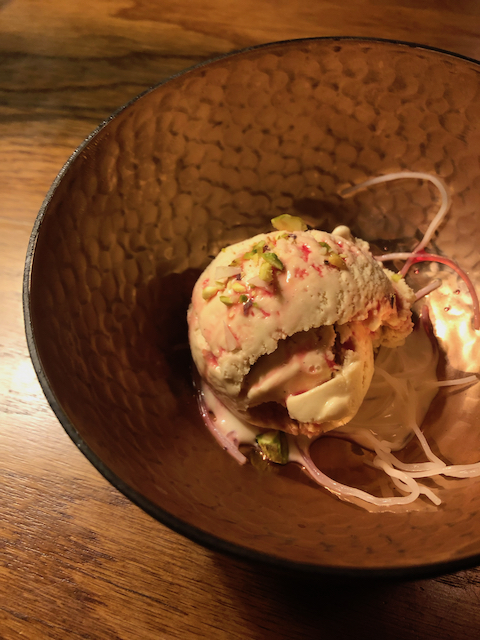 However, our favourite dish by far was the Pistachio Kufli; a nutty ice cream with hints of rose water. It was a lovely way to cleanse the palette after the spectrum of spice supplied by the street food bites.

As wonderful as the food was, we did have two concerns. The first being that we weren’t served many vegetarian dishes. However, when we looked at the menu, we realised that just under half of their day-to-day options were vegetarian, and therefore I wouldn’t have an issue eating there again as I would be happy to pick something I hadn’t tried already. Our second issue was that mango chutney was on the menu as a condiment and therefore subject to an extra charge! Now, I am a huge advocate of mango chutney, so I probably would find myself paying £1.50 to have some with my meal if I were to return, but I wouldn’t be happy about it.

just under half of their day-to-day options were vegetarian, and therefore I wouldn’t have an issue eating there again

Bearing this atrocity in mind, you might expect that the prices on the rest of the menu would be similarly eye-watering, but they’re not. The street food dishes are between £3.50 and £7.50, their mid-range curry selection is around £6.50 to £8.50 and their most expensive options, the grill plates, are between £8.50 and £11.00.

However, when you remember this is more of a jeans-and-a-nice-top kinda place, instead of an order-over-the-phone-and-collect-in-your-pjs kinda place, those price points are quite reasonable. However, because it’s that little bit posher, I would suggest keeping it in mind for a small occasion, or when your family visits, instead of thinking of it as your everyday Indian. 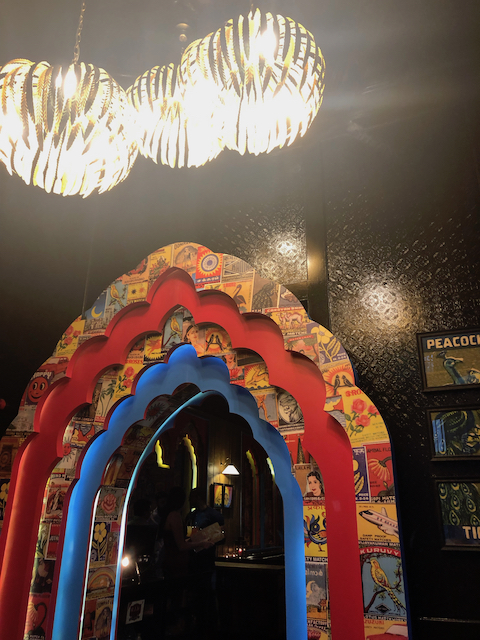 If you would like to try Burra Khana for yourself, it opened to the public on Friday 13th September 2019! Their table area is relatively small, so we would suggest booking a table via OpenTable in advance, as it is bound to be busy with people flocking to try their array of tasty delicacies in the coming months.

Jenny Katte and May Perrin

All images courtesy of Jenny Katte.