Part one of a two-part interview with award-winning engineer and Nottingham alumni Sophie Harker. Sophie graduated from UoN with a mathematics degree, and now works at BAE Systems. In this article, Sophie talks about her time in Nottingham, and her current role at BAE Systems.

Joe Paternoster: Why did you choose the University of Nottingham?

Sophie Harker: I knew that the university had a really good reputation, and a lot of my friends were applying, so I did to; I didn’t even visit the university until my first day there as a student! But I had the best 4 years at Nottingham and would choose it again in a heartbeat.

JP: What degree did you do? How has it contributed to your current career path?

SH: I did a four-year integrated maths Masters degree resulting in a MMath. I tailored most of my modules towards applied maths to help me with my engineering pursuits. Being a mathematician in an engineering world has had many advantages – I approach problems differently to my peers who went the traditional route and I am able to interrogate technical toolsets at a lower level due to the mathematical methods I studied during my degree.

JP: How did you end up at BAE Systems after the degree? Was it on a graduate scheme, for example, and did UoN offer much support in finding such a place?

SH: During my third year of university I decided it would be a good idea to get some experience at an engineering firm before I committed to the career once I graduated. I applied to a few big engineering companies for an internship and was offered a place at BAE Systems in their aerospace business unit. I was based in Christchurch (Dorset, not New Zealand!) for three months doing software engineering. I had a fantastic time there developing an app for the armed forces, which is still in use today! I finished my Masters degree the following year and returned to BAE Systems on their graduate scheme in 2014. I didn’t have much support from the university,  but that was really down to me as I didn’t seek it. In the UK, maths is often seen as subject leading only to finance or teaching, and so engineering is often forgotten about as a potential profession for students.

“In the UK, maths is often seen as subject leading only to finance or teaching, and so engineering is often forgotten about as a potential profession for students”

JP: How long have you been at BAE Systems? What do you like most about being there?

SH: I’ve been at BAE Systems just over 5 years now, 2 years of which were on the graduate scheme. What I love most about working in the company is that I get to work on large scale engineering projects that will take many years and many engineers to develop. Most of the work I have done is for aircraft that won’t be flying until 2030, 2040 and beyond! I get to really leave a legacy and make my mark on the future of aerospace.

JP: So, you are the ‘Senior Engineer for Flight Control Systems’ at BAE Systems – now what does that mean?

SH: Flight Control Systems are essentially the brain of the aircraft. They determine how the aircraft flies and interacts with the pilot (be they in the cockpit or on the ground). Currently, I work with a team of engineers looking at how a future Flight Control Systems will work in future air vehicles and developing the technologies that will enable it. When you work on projects with long development timescales as well as long lifelines (aircraft like those I work on tend to be in operation for over 30 years) you need to do an element of ‘crystal-ball interrogation’ to plan for what we’ll need the aircraft to do in 50 years’ time!

Prior to this role I was working as an aerodynamicist, looking at whether future concept aircraft will be able to fly, and if they can, how far, how fast and what can we do to improve their performance. I’ve taken a step into Systems Engineering to better understand how the design at an aircraft level affects the designs at a systems level.

JP: Have you worked on any aircraft that are currently in use now?

SH: During my graduate scheme I worked on military jets that are currently flying, however since I started working on future concept aircraft, I decided that that’s where I was most excited by the work. I’ve worked on several concept aircraft, including the Skylon spaceplane, and hypersonic aircraft that fly faster than 5 times the speed of sound, however none of those will be flying for at least another decade or two! 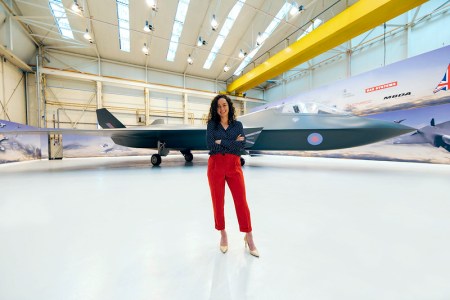 Sophie with the Tempest aircraft.

JP: In 2016, you were ‘‘BAE Systems’ Technical Graduate of the Year’. First of all, well done! And, second of all, how did you achieve this award, and how did it feel when you had?

SH: Thank you very much! During my graduate scheme, BAE Systems invested in a company called Reaction Engines Ltd, who are developing the Synergetic Air Breathing Rocket Engine (SABRE). This engine would enable hypersonic flight as well as Single-Stage-To-Orbit space access via spaceplanes. Being a huge space nerd, I knew I wanted to work with the company so I asked our engineering director if I could be seconded there. I spent 6 months in Oxfordshire working on the engine and the Skylon spaceplane, as well as promoting the company through blogs and virtual tours. For my work with them I was awarded BAE Systems Technical Graduate of the Year at the end of my graduate scheme in 2016. Winning this award was such an incredible feeling. I’d worked so hard and was so passionate about the project, so it was a really proud moment for me to have this work recognised by the company.

JP: Any advice to any students applying to work for BAE Systems?

SH: When I started at BAE Systems I knew very little about aircraft (I even bought the Fast Jet Top Trumps to start to learn about them!). I found out that the most important thing that the company is looking for when recruiting graduates is an interest in the industry and a proven ability to learn and solve complex problems, rather than a thorough understanding of aerospace engineering. My advice would be to show your passion for the topic and your willingness to learn new things.

“I’d also recommend getting involved in the wider activities at UoN in addition to your studies.”

I’d also recommend getting involved in the wider activities at UoN in addition to your studies. I was on numerous committees, I figure skated, I learnt to surf and competed for the university dance teams. The business skills I learnt through all of that have been essential in preparing me for the world of work and allowed me to demonstrate these skills with strong examples in my interviews for the company.

This is Engineering is a campaign by the Royal Academy of Engineering to raise awareness of what an engineer is and showcase the breadth of careers available in the profession. Visit www.thisisengineering.org.uk.

Featured image courtesy of This Is Engineering via Flickr. Permission granted by This is Engineering.

Body image courtesy of This Is Engineering via Flickr. Permission granted by This is Engineering.