Vegetarian and Vegan Society, also known as VegSoc, are a society for all foodies at UoN, plant-based or not. Our food editor Alice sat down with VegSoc’s committee to find out everything from the way they plan to run socials in the face of Coronavirus, to their take on the under-representation of the Black community in plant-based conversation.

Why does VegSoc matter?

Georgia (President): “I found it really important when I first came to university because I didn’t know anyone else who was veggie or vegan and it really gave me a space to feel ‘normal’ and also to get to know Nottingham as a city and what was on offer. Everyone was so welcoming, and it was nice to feel normal for an evening and just enjoy the company of people who think in a similar way.”

What do you think people get out of joining VegSoc?

Victoria (Treasurer): “You can definitely make new friends that you share similar views and interests with and I also think people are drawn to the society because you get to try new foods and have new experiences that you might not have other in societies.”

How will you continue with food-based socials in September with Covid-19?

Agnes (Secretary): “If we can meet in groups we’re planning social distanced events like outdoor picnics and takeaways or even craft events such as planting seeds and herbs together. If we aren’t allowed to do physical events we are planning to do virtual ones so whether it’s just a coffee morning with all of us sitting around and having a chat or a virtual cook along or cooking classes! We’re just going to try to keep the community spirit up no matter what the situation is.”

Round 2 of what is it really like being on Vegsoc committee?!? • Well… our year has been the best! here’s some of our highlights- Hosting the best dinner parties and going all out on food n decs, invited to meet the Bosh boys! Being sent merch and food from fab companies just for doing what ya do! Having your own stall at freshers fair, holding v important meetings/planning sessions at the best cafes in notts, making hilarious memories in last minute trips to the post office/city/shops for supplies! working with incredible charities, making amazing friends, deciding where events will be held (and sometimes sampling the menu beforehand!)getting to eat alllll the leftover snacks (and generally just lots of yum food) running your own cake sale, having a big group of people to share recipes/fave foods with, having the perfect excuse to procrastinate n try out that eco craft you’ve always wanted to!! and finally.. getting to say your pres + vp of vegsoc is pretty cool too!;) 💚 ** NOMINATIONS CLOSE AT 12pm TOMORROW!!** good luck in elections everyone!! it’ll be the best decision you’ve made:) lotsa love xx

We then moved on from the society to Veganism and Vegetarianism, the effects of it going mainstream and the continuing rise of the plant-based movement.

What difference does it make now veganism and vegetarianism is more mainstream?

Kat (Vice-President): “You see more options in supermarkets and they are much more affordable than they perhaps were a few years ago, especially if it’s something unique culturally. It’s really nice to see and obviously makes it more accessible as well. One of my favourite things is that when I go out to a cafe with my family and friends I can mostly assume, based on the place, that I’ll have something to eat and drink and I won’t feel like a weirdo alien!”

How easy is it to go vegan on a budget?

Kat: “As with anything it depends what you buy. If you’re constantly eating out, ordering food in and buying branded foods then it’s going to become expensive because that’s just the way supermarkets price things. For me, my diet is mainly made up of veggies, tinned beans, lentils and chickpeas. Sauces are really easy to make. It can become very cheap for making things in bulk and freezing it for meals like meat-free spagbol or stuff like that.”

What do you think are the main reasons for turning vegetarian or vegan?

Georgia: “Over the last years it’s definitely more environmental because that’s come to the front of conversation with the school strikes and that sort of thing. Sometimes health as well. I know some people will come to me as soon as they watch ‘Game Changers’ and say ‘It looks amazing I’m going to give it a go,’ but I do think most people will say to me I’m concerned about the environment rather than the ethics.” 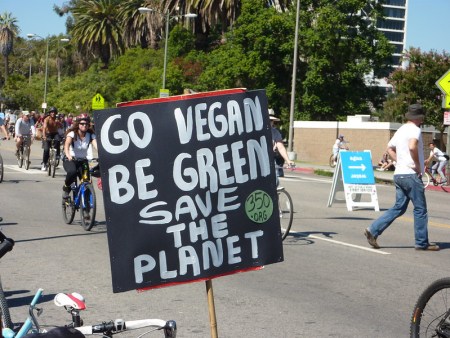 “I find the older generations and people in my family grew up thinking that ‘oh you can’t not eat meat, you need meat to get protein’ and it’s quite ingrained…”

Do you think the debate around vegetarianism and veganism has gone away or is it still very present?

Victoria: “For young people it isn’t much of a debate because people now know that you can get all the nutrients that you need, but I find in part with the older generations and people in my family, they grew up thinking that ‘oh you can’t not eat meat, you need meat to get protein’ and it’s quite ingrained in some people in my family.”

How do you think more people can be encouraged to go plant-based?

Agnes: “Change always starts at home and although our parents might be stubborn and definitely say ‘I’m never going vegan’ if you have vegan children, they will make more plant-based meals; that’s just a fact because we have to eat something when we come visit them! So they are still cutting down on their meat consumption even though they maybe won’t make that final ‘veg pledge’ at some point.”

BIPOC people seem to be largely underrepresented in the Vegan community despite being disproportionately plant-based, why do you think that is?

Georgia: “One of the main problems is taking foods that People of Colour used for years and years and years and repackaging them as new things, like quinoa and that sort of thing. There’s also not a lot of representation in cookbooks and everything, but also recipes from ethnic communities are taken by white writers and sort of repackaged. We do want to tackle all of this in VegSoc by introducing foods from other cultures and increasing representation on the blog that we’ve got planned.”

Finally, could you see UoN going plant based?

Georgia: “We’ll see a plant-based UoN eventually because it’s got this goal of being carbon neutral along with the city and Nottingham Trent by 2028. So, I think they will move towards having more options. I think it will be gradual, for some people it’s still early days and they still think it’s quite extreme, but I think we’ll definitely see an increase in demand and supply for sure.”

Hendersans, located on B floor of Portland building, offers a delicious meat-free menu.

I hope this has given everyone a ‘taste’ of VegSoc and the plant-based community at UoN. You can follow VegSoc on Instagram @vegsocuon and if you want to join them, you can purchase a membership through the UoNSU website which includes a special VegSoc membership card that gives you discounts off some great plant-based food!

Article image 2 courtesy of bunnicula via Flickr. Image license found here. No changes were made to this image.

If you can’t get enough of Impact Lifestyle then like our Facebook page, or, join our group to get involved as a contributor! Iif you want to hear more from Impact Food, follow us on Instagram!

The Ultimate Guide To Face Masks And Coverings